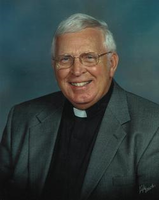 Father Carl E. Bauer,78, of Hampton, SC, formally of Star City, WV died Thursday, October 22, 2015 in the Medical University Hospital in Charleston, South Carolina. He was born July 11, 1937 the son of Carl E. and Virginia Naegele Bauer. Father Bauer was preceded in death by both his parents, as well as two sisters, Virginia Bauer Ebbert and Mary Elizabeth Bauer. He is survived by nieces: Virginia Ebbert and Bridget Ebbert Jordan, and nephew, James Ebbert; as well as Jeanne Howell, longtime friend and associate in ministry. His assignments in the Diocese of Wheeling/Charleston were few and long term. He served at St. Margaret Mary parish in Parkersburg, WV as well as being teacher, guidance counselor, and subsequently principal of Parkersburg Catholic High School from 1963-1969. From 1969-1974 he was rector of the Seminary House of Studies and was an instructor of theology at Wheeling Jesuit University. The next twelve years, 1974-1986, Father Bauer was pastor of Our Lady of Peace parish in Wheeling, and served as Dean of the Wheeling Deanery. As pastor of St. Mary parish in Star City, WV, from 1986-2002 when he retired he was also Vicar of the Clarksburg Vicariate. Father Bauer served his brother priests as president of the Presbyteral Council and chair of both the Priests' Personnel Committee and Continuing Education Committee. Involved in education at all levels he served as pastor of several Catholic Schools and any number of school boards, as well as, a director of Wheeling Jesuit University. Intent on implementing the renewal envisioned by the Second Vatican Council, Father Bauer served as spiritual director in the Christian Family Movement, Cursillo, Teens Encounter Christ, Engaged Encounter, and Christ Renews His Parish. Inspired by the wisdom of St. Paul, he lived his ministry believing that "all things work together for good for those who love God and are called according to his word". He continued his priestly ministry in the rural Low Country of South Carolina, where he was charged with two small mission churches, helped in supply to several other parishes and was Chaplin at a Federal Correctional Institution. Friends will be received at St. Mary Roman Catholic Church in Star City, on Wednesday, October 28th from 7:00-9:00 p.m. A Scriptural Wake Service will be held on Wednesday at 8:30 p.m. with Fr. John V. DiBacco, Jr. to conclude the evening’s visitation. Visiting will continue at the church on Thursday, October 29th from 9 am until the Catholic Funeral Liturgy at 11:00 am with Rev. Larry Dorsch as principal celebrant and priests of the Diocese of Wheeling-Charleston as co-celebrants. The Homilist will be Rev. Patsy Iaquinta. Entombment will follow at St. Mary Peace Gardens Mausoleum. Arrangements provided by Hastings Funeral Home. In lieu of flowers, donations may be made in Father Bauer's memory to St Mary Roman Catholic Church, 3334B University Ave, Morgantown, WV 26505, or St. Ursula Food Pantry, PO Box 18, Pursglove, WV 26546. Condolences may be sent to www.hastingsfuneralhome.com