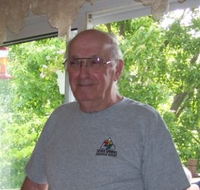 Richard Lee Holley I, 86, of Morgantown passed away on Tuesday, July 16, 2019, at his home surrounded by his loving family.

Richard was born on June 1, 1933, the son of the late William Holley and late Martha McBrayer.

He attended Morgantown High School and graduated with the class of 1951.

He was the owner/operator of Holley's Retreading Service and later became a proud WV coal miner at the Humphrey Mine and member of the UMWA, retiring after 23 years.

He was a talented woodworker, an avid gardener and a jack of all trades. He was a friend to many and enjoyed helping others. But his favorite pastime was spending time with his family.

In addition to his parents, Richard is preceded in death by his son Richard L. Holley II, grandson Joseph B. Dix, brothers William and Donald Holley.

Friends and family will be received at Hastings Funeral Home, 153 Spruce Street, Morgantown on Thursday, July 18, from 4:00 pm to 8:00 pm and again on Friday, July 19, from 12:00 pm until the time of the funeral service at 1:00 pm with Pastor Shawn Frasher officiating. Interment will follow at Beverly Hills Memorial Gardens.