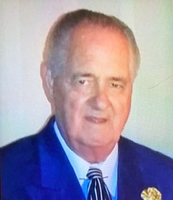 Robert "Bob" Ira Feathers, 77, of Morgantown, passed away on Friday, May 8, 2020 at United Hospital Center. He was born on December 9, 1942, a son of the late Ira and Helen Hoskins Feathers. Bob was employed at NASA Space Center in Florida and served as pastor of five churches. He was a member of Hope Church in Morgantown; an avid hunter and a very active in ministering to the Morgantown community. He was survived by his children, Kimberly D. Owens and companion, Mark Woodman and William Robert Feathers; stepson, David Arnold and wife, Ileona; grandchildren, Marc A. Owens, II, Kimberly E. Owens, Kara Archuleta, Jean Rodguguey, Talia Maldonado, Ileona Arnold and Tatiana Arnold; and great grandchildren, Haydon, Heaven, Jean and Hope. In addition to his parents, he was preceded in death by his loving wife, Carolyn Sue Feathers; brothers, William Feathers and David Rogers and stepdad, Clarence Rogers. Hastings Funeral Home has been entrusted with arrangements. Due to Covid19, there will be a private family service with a public memorial service to be announced at a later date. In lieu of flowers, donations may be made in Bob's memory to The Salvation Army, 1264 University Avenue, Morgantown, WV 26505. Send condolences online at hastingsfuneralhome.com.