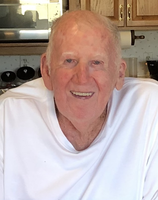 Charles Robert "Bob" Owen, 83, of Pentress, passed away on Tuesday, May 12, at his home. Bob was born in Blacksville, WV on November 14, 1936, the son of the late Raymond and Marguerite Kelley Owen. Bob was a retired licensed Funeral Director. After serving his apprenticeship and getting licensed at Hastings Funeral Home, Bob went on to own and operate Owen Funeral Home, (later Owen-Neely Funeral Home when his nephews joined him in the business) for forty plus years. Bob is survived by his loving wife of 59 years Betty Morris Owen, and many nieces and nephews. In addition to his parents Bob is preceded in death by 2 brothers, Eugene Owen, and Donald Owen: and two sisters, Beverly Tharp, and Janenne Owen. In accordance with Bob's wishes cremation services are being provided by Hastings Funeral Home. Send condolences online at hastingsfuneralhome.com