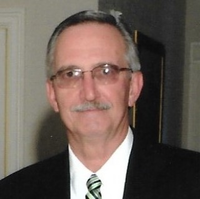 Franklin Dewight Feathers, 70, of Westover, passed away Monday, May 11, 2020 at his home surrounded by his family. He was born May 20, 1949 in Kingwood, WV, a son of Donald Franklin Feathers and Mary Ellen (Smith) Feathers Deaton. He was a graduate of University High School, Class of 1967, where he was the quarterback of the football team. He was also active in Student Council and served as Vice President his Junior year and President his Senior year. From 1968-1972, he served his country in the United States Air Force. After completing his military duties, he attended the Community College of Baltimore MD, where he received a Degree in Computer Programming. He was employed for 13 years as Assistant Vice President of Operations at the First National Bank of Morgantown and worked for 22 years as the Business Manager/Purchasing Agent for the Morgantown Utility Board. He was a former member of the Morgantown Kiwanis Club, and served on the Westover Recreation Commission. He volunteered his time for youth sports, including, WesMon Baseball, Westside Basketball, MYSA and NCU Soccer. He is survived by his wife of 50 years, Kathleen Pancoast Feathers, whom he married on June 21, 1969. He is also survived by his sons, Jordan T. Feathers, his wife Kristin and beloved granddaughter, Avery Emma Feathers; and Jonathan T. Feathers and his wife Tiffany; brother-in-law, Robert J. Pancoast and his wife Donna; nieces and nephew, Jobeth Souza and family, Ricki Barley and family, and Brian Pancoast and family. He is also survived by many cousins and cousins-in-law. He was preceded in death by his mother and step father, Mary and Harry Deaton; brother, Gary Deaton; father-in-law and mother-in-law, Robert J., Sr. and Dorothy Pancoast; grandfather, Albert Feathers; and uncle and aunt, Foster and Elizabeth Feathers. The family would like to give a special thank you to Dr. Ronald Pellegrino, and the WVU Mary Babb Randolph Cancer Center, Dr. Mohammed Albumarek and Adrienne Duckworth, CNP. Memorial donations may be made to Canyon Food Pantry (his mother-in-law was a co-founder), c/o M. Gribko, 18 Whipkey Lane, Morgantown, WV 26508 or to the WV Caring Hospice, PO Box 760, Arthurdale, WV 26520. In keeping with his wishes, cremation arrangements have been entrusted to Hastings Funeral Home. A memorial service will be planned for a later time. Online condolences may be made at www.hastingsfuneralhome.com.