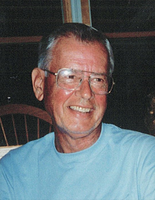 Douglas Leon Gill, 94, of Morgantown, passed away on Thursday, May 14, 2020, at Sundale Nursing Home. He was born in Tazewell County, VA, on July 6, 1925, a son of the late Howard Hounshell Gill and Virginia Irene Crocket. Doug served in the US Navy during WW II and went on to graduate at WVU’s School of Pharmacy where he served as professor of Pharmacy and retired as faculty member. He was an avid golfer, hunter, fisherman and dedicated Mountaineer fan. Doug was survived by his wife, Gwen whom he married in 1984; children, Mary Jo Jacobs and husband, Andy, of Bolivar, OH, Carol Hamilton and husband, Chip, of Martinsburg, Debbie Perfetto and husband, Steve, of North Potomac, MD, and Doug Gill, Jr., and wife, Sharon, of Greensboro, NC; stepdaughter, Katie Blakeley and husband, Chris, of Louisville, KY; 11 grandchildren, seven great grandchildren; and brother Bob Gill and wife, Kay) of Broomfield, CO. In addition to his parents, he was preceded in death by a brother, Jim Gill and Doug’s first wife, Margaret Gill. Hastings Funeral Home Omega Crematory has been entrusted with arrangements and a memorial service will take place at a later date. Donations may be made in Doug’s memory to a charity of one’s choice. The family wishes to thank Sundale Nursing Home for his great care. Send condolences online at www.hastingsfuneralhome.com.