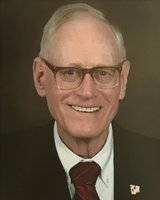 Royce J. Watts, 91, of Morgantown, West Virginia, died on May 29, 2020, in Dallas, Texas. Born Royce Jackson Watts, on January 28, 1929, he was the first child of William Jackson Watts and Dorothy Gregory Watts. Royce was born in a company house in the coal mining community of Cassity, Randolph County, West Virginia. Royce graduated from Tyler County High School, in Middlebourne, West Virginia in 1946. Immediately following graduation, Royce entered the United States Army. Following basic and advanced training, Royce was assigned to the military occupation forces in Italy, where he served two years with the 88th Infantry Division and later with the Trieste Garrison. Royce enrolled at West Virginia University ("WVU") in 1949. While attending WVU, Royce met his wife to be Caroline Isabell Baker, also a student at WVU, in 1950. Royce and Caroline were married on September 3, 1950. Following their return from their honeymoon trip, Royce was recalled to active duty in September 1950 and spent the next 12 months in Korea in a combat unit with the Second Infantry Division. During his duty in Korea in 1951, Royce was a recipient of numerous awards and decorations, including the United States Presidential Unit Citation, the Korean Presidential Unit Citation and the Silver Star, this nation’s third highest military award for conspicuous gallantry in action. After leaving active duty for the second time, Royce continued his military career through the United States Army Reserve. He began his military career as a Private in 1946 and retired as a full Colonel in 1989. Royce received his undergraduate degree in accounting from WVU in 1954 and his masters degree in economics from WVU in 1961. Royce began his professional career in academia at WVU in 1955. From July 1957 through January 1961, Royce worked with the West Virginia Worker’s Compensation Fund as Actuary and Director of the Actuarial-Statistical Group. Thereafter he returned to WVU, serving in numerous teaching and administrative positions. Royce served as the Associate Dean - Administration, first with the College of Mineral and Energy Resources and then with the College of Engineering and Mineral Resources from 1979 until he retired in August 2017, after 58 1/2 years with WVU. Royce was active in many community, social, and professional organizations. He was a member of The Society of Mining, Metallurgical and Exploration, Inc., The Society of Petroleum Engineers, and The West Virginia Coal Mining Institute. He served as the Assistant Secretary-Treasurer or Secretary Treasurer of The West Virginia Coal Mining Institute for 38 years. Royce also held local, state, and national positions in Civitan International, an organization of community service clubs dedicated to helping others. He coached youth baseball at all levels for 20 years and served as the President of the Morgantown Baseball Association for 10 years. Royce was also an active member of Wesley United Methodist Church in Morgantown for over 50 years. During the course of his career, Royce received numerous awards for his service to WVU and the West Virginia coal industry through The West Virginia Coal Mining Institute. He was recognized as a Distinguished West Virginian by Governor Cecil H. Underwood in 1997 for his contribution to the continuing education of mining professionals. Royce was awarded the Erskin Ramsey Gold Medal in 2007 by the American Institute of Mining, Metallurgical and Petroleum Engineers "for his dedication to the best interests of the coal mining industry, the university and its students and a champion for the preservation of our mining heritage." Royce was an inductee of the Class of 2008 into the West Virginia Coal Hall of Fame for having "made a significant contribution to the development and growth of the coal industry in West Virginia as evidenced by documented accomplishments." Royce was named Most Loyal Faculty Mountaineer in 2007 for his "consistent and dedicated service to WVU since 1955." Royce was the recipient of the Paul B. "Buck" Martin Award in 2017 from the WVU Alumni Association "recognizing a graduate who has worked to preserve, maintain, and promote the traditions of WVU." Royce was also named Assistant Professor Emeritus in 2017 in the WVU John Chambers College of Business and Economics where he taught accounting, economics and statistics for over 40 years. He was the recipient of the Stephen McCann Memorial Award for Excellence in Education in 2019 from the Pittsburgh Coal Mining Institute of America "for exemplary contributions to mining and minerals education." Royce was instrumental in the establishment of WVU’s College of Mineral and Energy Resources (COMER) Museum. In 2005, The West Virginia Coal Mining Institute endowed the Museum and requested that it be renamed The Royce J. and Caroline B. Watts Museum "for two individuals who have tirelessly supported its mission through both financial support and other resources on behalf of the museum for more than two decades." Royce was preceded in death by his wife of 68 years, Caroline Baker Watts, by his parents, William Jackson and Dorothy Gregory Watts, his sister, Onala Virginia Watts Givens, and her husband, Lonnie Givens, of Ann Arbor, Michigan, and his brother, William Grant Watts, and his wife, Millie Watts, of Weirton. Royce is survived by his son and daughter-in-law, R. J. Watts, II and Maureen W. Watts, of Dallas, Texas, his brother and his wife, Royal James Watts and Janice Watts, of Fairmont, and numerous nieces and nephews. Visitation will be held at Hastings Funeral Home in Morgantown on December 4, 2020, from 6:00 to 8:00 p.m. A memorial service to celebrate Royce’s life will be held at Wesley United Methodist Church in Morgantown on December 5, 2020, at 1:00 p.m., with Rev. Dr. Randall Flanagan officiating. Both the visitation and memorial service will be subject to the status of the COVID-19 pandemic. A burial service will be at Arlington National Cemetery on December 7, 2020, at 1:00 p.m. In lieu of flowers, the family suggests memorial contributions to a charity of your choice or The Royce J. and Caroline B. Watts Museum, at West Virginia University, PO Box 6070, Morgantown, WV 26506. Online condolences may be made to the family at www.hastingsfuneralhome.com.