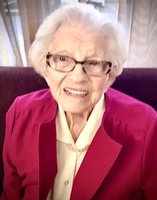 Wanda G. Harold, 100, formerly of Morgantown, WV, passed away peacefully June 23, 2020, in Ellicott City, MD, with daughter Jackie and family at her bedside. Wanda was born February 13, 1920, daughter of Asa and Edna (Willard) McCartney. She grew up in Star City and married Jack Ellsworth DeVault, son of Henry and Maud (Stansberry) DeVault of Route 73. Jack was killed in an auto accident in August 1941, shortly before their third child was born. Her parents had moved to Evansdale and she and the children went to live with them after her husband's death. Always trying to earn more money to support her family, when the opportunity arose for women to work in defense plants during WWII she became a 'Rosie the Riveter' type, working in plants in Cleveland, OH, Yakima, WA, and Cheyenne, WY. Her mother and father gave up much of their personal life to bring up the children while she was away; as kids they felt loved and happily recall those years playing in the fields, woods and creek, picking berries (near where St. Francis High was later built), going to Sellaro's store, and sledding down hills near the current WVU Alumni Center. They remained in the neighborhood where they grew up long after their mother returned home. Wanda did not remarry until 1953. She was preceded in death by her husband of 62 years William A. (Bill) Harold, her only son Richard Ellsworth DeVault of Celina, OH, her sister Helen and husband Max Hess of Morgantown, brothers Kenneth and wife Margy (Dibb) of San Diego, CA, and Wayne McCartney for whom she was caregiver at the time of his death in 1995. Also, in 1995 she lost grandson Douglas Allen Smith of Ellicott City, MD, and recently son-in-law Richard Tylka of Raleigh, NC, formerly of Carmichaels, PA. Surviving are Wanda's daughters Janice (the late Richard) Tylka of Raleigh, NC, and Jacqueline (Ray) Falker of Ellicott, MD, daughter-in-law Jean Martin (the late Richard) DeVault of Celina, OH; 7 grandchildren, Paul J.(Kathy) Smith, Raymond Falker, Karen Tylka (Phil) Feller, Jacqueline, Richard Jr., and Michael (Michele) Tylka, and Lisa DeVault (Kenny) Wendel; 13 great-grandchildren and 2 great-great grandchildren, with another expected in September. Also surviving are niece Judith Hess (Martin) Rivers of Ottawa, Canada, nephew David (Debbie) Hess of Maine, and nephew Kenneth McCartney of California. Of the many DeVault nieces and nephews, 4 are known to be in Morgantown, Bernice Kincaid, Janet Kramer, Edie Harper and Jane Summers Kelly. Also in Morgantown is one of Wanda’s last 3 surviving first cousins, Barbara Grimes (Joseph) Cupelli; her brothers Danny and Richard Grimes are out of state. Wanda and Bill were grateful for the help given during their last years in WV by second cousins Donald and Becky Davis of Maidsville. Wanda was an attractive woman whom her children were always proud to call their mom. When the girls grew up, people would comment they looked like three sisters walking down the street. She had a pleasant personality and a ready smile and was easy to talk to. Wanda was also a good cook, very particular about how her cleaning and laundry were done and she always worked hard to provide for her family. At one time she worked at the Morgantown Shirt Factory but starting in 1947, she spent 42 of her working years in the Shipping Office of Sterling Faucet Co., retiring in 1989. She was also an avid bowler and being on the same team with her longest-living friend, Margaret Simpson Royce, they earned many, many bowling trophies. Margaret passed away in February 2020. She had also retired from Sterling Faucet and the two kept in touch up through 2019. Wanda remained active throughout her life. She took advantage of the Morgantown BOPARC activities and participated in exercise programs until about age 91. After a number of illnesses through which her husband and children cared for her, they left their home in Morgantown to live with daughter Jackie and family in 2015. At that time, she was not expected to live long, but the excellent care from Jackie, Ray and Raymond had her out shopping, dining and having her hair and nails done. She continued to follow Morgantown, watching WVU games and reading the Dominion Post until a few months ago. On February 13, 2020, (pictured above) she stayed out for 3 hours, smiling, greeting guests, and eating cake and ice cream at her 100th Birthday Party. The family is grateful for the loving care and comfort she received in her final years from Jackie and her family and the later assistance of Ethel Kelch from Homewatch, Ellicott City. In lieu of flowers, please consider a donation in Wanda's name to the animal charity ASPCA, Gift Processing Ctr., P O Box 96929, Washington, DC 20077, www.aspca.org/donate, or to Gilchrist Hospice, 11311 McCormick Rd, Hunt Valley, MD 21031, https://gilchristcares.org (Howard County Center) (443)849-8200. Family and friends will be received at Hastings Funeral Home, 153 Spruce St., Morgantown on Wednesday, July 8th from 2-4 & 6-8 PM and on Thursday, July 9th from 9 AM until the time of the funeral service at 10 AM with Pastor Dan Meadows officiating. Entombment will follow at Beverly Hills Memorial Gardens in Westover. Hastings Funeral Home appreciates that during this time of the COVID-19 pandemic, attending a visitation and funeral may not be in your best health interest. Visitors are asked to adhere to all current CDC guidelines. We encourage everyone to visit our website at www.hastingsfuneralhome.com to offer online condolences or a remembrance.