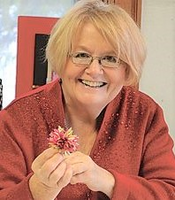 Laverne Hamrick Chase, 70, of Elkins, died early July 22, 2020, in Elkins Rehabilitation and Care Center after a battle with metastatic breast cancer. Her health rapidly declined within the last month. She was born January 25, 1950, at Elkins, the daughter of the late Troy and Virginia Conrad Hamrick. In addition to her parents, she was preceded in death by her older brother Ellsworth Troy "E.T" Hamrick and her second husband Gary Chase. She is survived by her daughter Carra Higgins and companion James Gatian of Morgantown; her daughter's Golden Retriever, Teddy, and cats Jordy and Landry. Laverne affectionately called them her "granddog" and "grandkitties." Also surviving are her son, Troy Higgins and wife, Myra, of Philippi; grandson David, and soon to arrive grandson Kevin. Troy and Myra's Poodle, Diesel, also had a special place in Laverne's heart. Her first husband, David Higgins, and several cousins also survive. Laverne loved all her children's friends, too numerous to name, like her own. She often expressed her affection by cooking or baking, or correcting grammar or behavior. She was reared in Valley Head and attended primary school at Mingo and graduated from Tygarts Valley High School in 1967. After high school, she lived and worked in Washington, D.C. for a year, and during summers in order to attend Fairmont State College, from which she graduated in 1971. She began working at Elkins Junior High after college, teaching English. She went on to achieve her master's degree, plus many hours, in education from West Virginia University in 1978. After leaving Elkins Junior High, she began working at Elkins High School teaching English, and served as the yearbook adviser for a few years. She eventually became the Elkins High School librarian/media specialist, the position from which she retired. During most of her years an educator, her students would have known her as Ms. Hamrick or Mrs. Higgins. In addition to educating students at Elkins Junior High and Elkins High, she was an adjunct professor for Fairmont State College/Pierpont during the 1990s and early 2000s. Laverne truly cared about all of her students, no matter his or her background or abilities, and tried to instill in them an appreciation of literature, poetry and grammar -- the keys to understanding humanity. Other than influencing and inspiring students in the classroom, her proudest moment as a teacher was participating in the first West Virginia teacher strike in 1990. She was always a staunch supporter of unions and served as President of Randolph County American Federation of Teachers. During her retirement, she enjoyed crafting and scrapbooking, attending many retreats with her daughter and friends; quilting, especially her time as a member of the Log Cabin Quilter's Guild and during retreats; traveling anywhere the road might lead, particularly with her long-time friend and ultimate trip companion, Helen Kennedy, who has been exceedingly supportive during the last six months; and, spending as much time as possible with her grandson, children and many good friends. Throughout her life she enjoyed traveling and learning. Her fun-loving, outgoing spirit and infectious laugh will be missed by all who knew her. Laverne's family extends their appreciation to the staff of Elkins Rehabilitation and Care Center for their care and compassion during the last month. In lieu of flowers, honor and remember Laverne by making a book or monetary donation to a community or school, particularly elementary, library, which will always be relevant and always evolving – never obsolete; or, to the WVU Rockefeller Neuroscience Institute in support of Alzheimer's Research at give.wvu.edu/wvumedicine-rni and select Alzheimer's Disease Research fund button. Anyone unable to make a monetary donation could take a few minutes to read for themselves or to a child in Laverne's memory. Following Laverne's wishes, she has been cremated and her ashes will eventually be interred at Swecker Cemetery, near Valley Head, with the rest of her immediate family. Carra and Troy plan to host a celebration of her life when it is deemed safe to gather in groups. Further details about the celebration will be shared and published. Hastings Funeral Home of Morgantown has been entrusted with the arrangements for Laverne Hamrick Chase. Send condolences online at www.hastingsfuneralhome.com