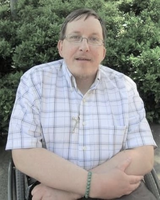 Edward Martin “Zoom” Curtis, 49, of Morgantown, died Wednesday, August 26, 2020 at Mon Health Medical Center. He was born October 15, 1970 in Detroit, MI, a son of the late Hugh Arthur and Polly Elizabeth (Throm) Curtis. Ed was a member of St. Mary Roman Catholic Church and was a Fourth Degree Knight with the Knights of Columbus. He was a graduate of Wright State University and worked in the federal government for many years. He loved spending time with his many friends and will be missed by many. In his free time, he enjoyed ballroom and line dancing, travelling, watching the Detroit Lions and Detroit Tigers and Star Trek, and Earl Grey Tea. He is survived by his sister, Beth Pierce and her husband Troy of Jackson, MI; aunt, Louise Roman and her husband Doug; uncle, Chuck Throm; and several nieces, nephews, and cousins. In addition to his parents, he is also preceded in death by his sister, Adriana Curtis. Cremation arrangements have been entrusted to Hastings Funeral Home. Friends will be received at St. Mary Roman Catholic Church, 3334B University Ave., Morgantown, WV, on Tuesday, September 1st from 5 PM until the Mass of Christian Burial at 6 PM with Father John McDonough as Celebrant. Inurnment will follow at St. Mary Peace Garden Mausoluem. Knights of Columbus 4th Degree will be standing guard during the visitation. In lieu of flowers, the family asks that memorial donations be made to St. Mary Roman Catholic Church, 3334B University Ave., Morgantown, WV 26505. Online condolences may be made at www.hastingsfuneralhome.com.