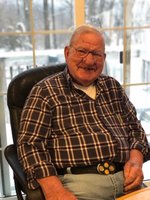 John L. “Pappy” Stockett, 92, of Morgantown, died Saturday, August 29, 2020, at his residence surrounded by his family. He was born October 17, 1927, in Preston County, WV, a son of the late William and Ocie Stockett. He was preceded in death by his wife of 53 plus years, Ruby C. Stockett. John is survived by two sons, John Jr. and Randy (Rebecca) Stockett and four daughters, Judy (Harvey) Kisner, Karen (Doug) Stewart, Penny (Randy) Gyorko and Cindy (Terry) Gyorko. Also left to cherish his memory are 26 grandchildren, 50 great-grandchildren, and 3 great great-grandchildren. He is also survived by his brother Zach Stockett and sisters, Carol Strahin and Iris Kelly. In addition to his parents and wife, he was also preceded in death by his son, Dana G. Stockett, son-in-law Rob Lowe, daughters-in-law Patty Stockett and Kathy Stockett, grandson Mark Allen, brothers Bill Stockett, Dana Stockett, Edsel Stockett and sisters, Ardath Groves, Mardath Groves, Gladys Current, Gloria Lee, Clarice Lipscomb and Joy Johnson. The family would like to acknowledge Tonya Gillum and Debbie Dezuttie (whom Pappy referred to as his “other” daughters), for the love and care you shared with Pappy over the years. You will never know how much it meant to him and his family. A special thank you to granddaughters Amber, Amanda and Abbey, as your love and care did not go unnoticed and to WV Caring’s Carrie, Lacey and Janet. John honorably served our country in the U.S. Navy during WWII. Hastings Funeral Home has been entrusted with arrangements. Friends and family will be received for visitation at Pappy’s residence on Stockett Road, on Tuesday, September 1st from 11:00 a.m. to 9:00 p.m. A graveside service will be held at Fairview Cemetery at Pisgah in Preston County on Wednesday, September 2nd at 1:00 p.m. with the Pastor Janice Smith officiating, along with daughter, Karen Stewart and grandson Rob Lowe. Full military funeral rites will be conducted at the cemetery. Hastings Funeral Home appreciates that during this time of the COVID-19 pandemic, attending a visitation and funeral may not be in your best health interest. Please take all recommended precautions as recommended by the CDC. In lieu of flowers, donations may be made in his memory to Morgantown Meals on Wheels, 3375 University Avenue, Star City, WV 26595, or WV Caring, 3347 University Avenue, Morgantown, WV 26505. Online condolences may be made at www.hastingsfuneralhome.com