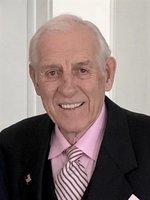 Robert “Bob” Bell, 85, of Morgantown, WV, passed away peacefully with his family at his side at J W Ruby Memorial Hospital on Monday, August 31, 2020. Bob was at peace with his life because of his strong Catholic faith. He was born in Blacksville, WV, on July 21, 1935, son of the late Albert and Mary Bell. Bob moved to Fairview at age five, graduated from Fairview High School and Fairmont State University with a Bachelor of Science degree in Accounting. Bob joined the U.S. Army after graduation and spent time in the Pentagon in Washington, DC and was later assigned to the American Embassy in Paris, France - NATO and Supreme Headquarters Allied Powers Europe (SHAPE). He carried the highest security clearance of Top Secret given to military personnel and he was proud to have served the United States in that capacity. Bob returned home to Morgantown after his military service and worked for Bell’s Wholesale. He was a serial business owner and entrepreneur as he developed and launched a number of successful business ventures including: Big B Supermarket; Valu-King Food Center; the Mileground Car Wash; Mr. Tire - Western Auto; Fairfield Manor Mobile Home Park in Morgantown and East Park Mobile Home Village in Fairmont. Bob was elected to and served on the Monongalia County Commission for 12 years. He was President of the County Commission for seven of those years. Bob was very proud of the accomplishments of the Commission during the time he served. He also served the public and the greater community in the following capacity: County Commissioner Association as Representative of Commissioners on the Association of Counties for six years; Board Member of Chamber of Commerce; Board Member of the Solid Waste Authority; initiated the Litter Control Office for Monongalia County; Chairman of the Workforce Investment Board; served 12 years on the Monongalia County Development Authority; worked with the homeless in Monongalia County to improve their lives; initiated the Monongalia County Canine Adoption Center; served on the Board of the Monongalia County Health Department; very active with Saint Francis High School, serving as President of the Boosters Club for six years; coached for 12 years in the Monongalia County Babe Ruth Baseball League; served as 3rd degree Knights of Columbus; served 30 years on the St. Mary Parish Finance Council; served as General Manager of the Pines Country Club from 1993-2000; and was a past member of Morgantown Rotary. Bob was very proud of his efforts to develop the Monongalia County Justice Center Building completed after his term in public office. Bob is survived by his wonderful and adoring fiancée Donna Hidock and her daughter, Courtney Balestier; his adult children, Christina Bell Farrish and husband, Craig; Michael Bell and wife, Shannon; Mark Bell and wife, Joyce; and Matthew Bell and wife, Brooke; sisters Bernadette Harker and Rosemary Tennant, brother Albert Bell; twelve grandchildren including, Jacob, Nicholas and Luke Farrish; Andrew, Finley and Topher Bell; Brittney Green, Tyler and Hunter Bell; Haleigh, Taylor and Braden Bell and one great-grandchild, Brysten Bell. In addition to his parents, he is preceded in death by a sister who died at birth, Gloria Jean. Friends and family will be received at St. Mary Church, 3334B University Avenue, Star City, on Thursday, September 3, 2020 from 4 – 8 p.m. The evening visitation will conclude with a Scriptural Wake Service at 7:30 p.m. Visitation will continue Friday, September 4, 2020, at St. Mary Church from 10 a.m. until the Mass of Christian Burial at 11 a.m. with Father John McDonough, as Celebrant. Entombment will follow at St. Mary Peace Gardens Mausoleum with full military honors. Hastings Funeral Home appreciates that during this time of the COVID-19 pandemic, attending a visitation and funeral may not be in your best health interest. Due to the CDC recommendations, we encourage everyone to visit our website at www.hastingsfuneralhome.com to make online condolences. In lieu of flowers, donations may be made in Bob’s memory to the St. Mary Church Building Fund, 3334B University Avenue, Star City, WV, 26505 or the Monongalia County Canine Adoption Center, 106 Lockside Road, Westover, WV, 26501.