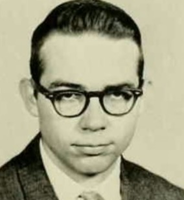 Thomas R. Cooley, age 79, passed away on September 3rd, 2020, at home in Morgantown, WV. He was born December 22nd, 1940 in East Herkimer, NY. He is survived by his three beloved children and their families: Susan M. Cooley, Cheryl L Cooley (Carlos) and Michael D Cooley (Amy) and his beloved brother, James K. Cooley, MD, and many nieces and nephews. He also is survived by his cousin Sheila Hynes. He had five grandchildren: Nathan, Barbara Ann, David, Lindsay and Stephen. He was preceded in death by his parents, Ernest and Mary Cooley, of East Herkimer, NY; his brothers, Dr. William Cooley and Dr. Daniel Cooley; and his ex-wife, Druzella McDonald of whom he remained close. He graduated from Herkimer High School class of 1958, then graduated from Atlantic Union College and Albany Pharmacy School. He was a pharmacist for several years, and a cab driver in later years. Soft-spoken often, yet unpolished at times, he was considered eccentric by many. He had a perfect ear for music and could easily learn a song and play a variety of instruments. Visiting with his lifelong friend, Milt Baker, he would often mean a hours long jam session, with the children joining in to sing. He was a gifted artist, drawing for pleasure mostly. He loved movies and going to the drive in with his ex-wife when they were younger. In his younger years, he enjoyed hot rods and car racing and often would go to the speedways on the weekend. He would take his children to Scotties Go Karts in the summer, which Michael remembers fondly. He was passionate about chess, a professionally rated player, and played frequently, setting up the board within a moment's notice. He often played tennis with his children during the summer, followed by black raspberry ice cream, down on Caroline St in Herkimer, NY. Shed Brook and Flat Rock were some of his favorite swimming holes in the summer, right after a Kentucky Fried Chicken picnic. He loved blackberries, and they were a fun pastime for him, picking them and of course eating them, sometimes with milk and honey that Ernest (Gramp) had left over from his bee keeping days. He had a unique, genuine laugh, that could only make the listener laugh more heartily at one of his stories, because of his unabashed glee in telling it. He gave to those who needed it when he could. Many in his life passed him over, without understanding his gentle and simple soul. Those who truly knew him, loved him dearly. He will be greatly missed. Send condolences online at www.hastingfuneralhome.com