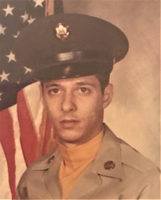 Harold Andrew "Andy" Shartzer, Jr., 70, of Morgantown, passed away Monday, October 26, 2020 at his home. He was born April 26, 1950 in Morgantown, a son of the late Harold and Louise (DeMarco) Shartzer, Sr. He was a Catholic by faith and grew up in Morgantown and attended area schools. Andy served his country in the United States Army during the Vietnam Era and was discharged in 1972. He was a coal miner, heavy equipment operator, truck driver, and owner of Handy Andy Hauling for several years. He is survived by his siblings, Mary Kay Davenport and her husband, Dale, and Janet Robinson. Hastings Funeral Home has been entrusted with cremation arrangements. Inurnment will take place at the WV National Cemetery with full military honors. Online condolences may be made at www.hastingsfuneralhome.com.