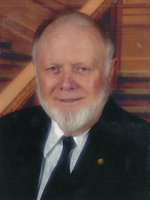 Donald Hilmer Nordstrom (Pete) died on December 26, 2020 after a brief illness. Don was born in Kearny, N.J. on September 24 1929, the youngest son of Gustof Hilmer Nordstrom, a Swedish immigrant and Esther Olive Johnson Nordstrom, daughter of Swedish immigrants. Don retired with the rank of Captain after serving 29 years in the United States Army, the Army Reserve and the New Jersey National Guard. He served with a military honor guard in the Morgantown area. He was a life member of the Carpenters and Joiners of America, The Military Officer's Association of America, The Society of the 1st Infantry Division, and the 16th Infantry Association. He was a member of the American Legion Post 950 in Pennsylvania and past member of the Mt. Morris (PA) Lions Club and VFW 548 in Morgantown, WV. Don was very proud of his Swedish heritage and passed on the traditions to his three children, Cherie, Ted and John, four grandchildren, Jennifer, Jenna, Adison, and Griffin, and his great grand daughter Emily. Don and Virginia Emma Schaivi Nordstrom were married for 57 years. Don was preceded in death by his wife in 2011 and his brother Harold Carl Nordstrom. Hastings Funeral Home has been entrusted with cremation arrangements and condolences may be made online at www.hastingsfuneralhome.com. A celebration of his life will be held in New Jersey sometime in the coming months. Donations may be made in his honor to the Salvation Army, 1264 University Avenue, Morgantown, WV 26505.