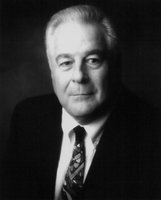 George R. Farmer, Jr., 92, passed away peacefully on January 11, 2021 at his home in Morgantown, West Virginia after a long and successful life, surrounded by his family. He was born on June 23, 1928, son of George R. Farmer and Lucy Thompson Farmer. He graduated from Morgantown High School in 1946, from West Virginia University in 1952, with a degree in finance and from the WVU College of Law in 1956. He served his country twice in the United States Army: post World War II in the European Theatre as a private infantryman and again as a 1st Lieutenant in the Korean conflict where he led troops courageously and was recognized for gallantry in combat. He was a lifetime member of Wesley United Methodist Church. Upon returning from service, he met and married his loving wife and perfect life partner, Mary Ann (Lawson) Farmer. They were married on June 12, 1954 and were steadfastly committed to each other until his passing. After completing his law degree in 1956, he began practicing with his father, George R. Farmer, in the firm Farmer & Farmer. In 1982, Farmer & Farmer merged with Jackson Kelly, the State’s oldest law firm, where he practiced until his retirement. He loved the practice of law and was fiercely loyal to his clients. Throughout his career, he had been a member of and actively involved in the West Virginia Bar Association, the American Bar Association, and the Defense Trial Counsel of West Virginia. He was a past president and member of the Monongalia County Bar and the West Virginia State Bar, and was a chairman and member of the Board of Governors of the West Virginia State Bar. He was a mentor to many young lawyers over his career. He served as a member of the Judicial Inquiry Commission from 1976 - 80. In 2002, he was inducted as a Fellow of the West Virginia Bar Foundation, and was distinguished by the WVU College of Law with the Justita Officium Award - its highest honor. He loved his community of Morgantown and West Virginia University. He was fond of saying, “I’ve been all over the world and there’s no better place than Morgantown.” He worked hard in his community and envisioned many projects which have changed the face of Morgantown. He was a founding member and director of the Pines Country Club, was president of the Morgantown Kiwanis Club, served on the board of directors of Farmers & Merchants Bank and One Valley Bank, and received the Earl L. Core Award from the Morgantown Area Chamber of Commerce in recognition of his community work. He and Mary Ann were recognized by WVU as Most Loyal Mountaineers and he was honored with the Order of Vandalia - WVU’s highest honor. He was also a supporter of Boy Scouts of America,and worked hard on improvements to the local Boy Scout camp, making it one of the best in the nation. He was recognized by the Boy Scouts as its first “Distinguished Citizen” in this area and awarded the Golden Eagle Award, the Boy Scouts highest civilian honor for community service. He was recognized by the governor of West Virginia as a Distinguished West Virginian, West Virginia’s highest honor. Mr. Farmer served as personal counsel and advisor to both J.W. and Hazel Ruby during their lifetimes. After Mr. Ruby’s passing, he counseled and advised Hazel through her lifetime of philanthropy and, upon her death, became the founding trustee of the Hazel Ruby McQuain Charitable Trust. In that position he worked to honor Hazel’s commitment to the community and beyond, the effects of which are everlasting. Hazel honored his work by making a substantial gift to the WVU College of Law to dedicate the George R. Farmer, Jr. Law Library. He is survived by Mary Ann, his wife of 66 years, children, George R., III (Joan), Stephen B. (Karen) and Jeffrey W., grandchildren, Brooks H. Farmer (Caitlin), Chase L. Farmer (Katie) and Caitlin L. Grove (Thompson), great-grandchildren, Caden M. Farmer, Adeline Rose Grove and Lawson J. Farmer, his sister Mary E. Elder, and nieces Janet (Ray Ostanek) Elder and Lisa (Tom) Laurienzo and his grand nieces Julie Laurienzo (Nando Hobbs) and Mary Beth Laurienzo. He is preceded in death by his beloved son, David L. Farmer, and his sister, Susan Thompson Farmer. Due to Covid 19, there will be no visitation or public service at this time. There will be a private graveside service with family at East Oak Grove Cemetery. Once it is safe, his family will host a celebration of his extraordinary life. In lieu of flowers, donations can be made to the WVU Foundation 1 Waterfront Place, 7th Floor, Morgantown, WV 26501 or Wesley United Methodist Church, 503 North High Street, Morgantown, WV 26505. George R. Farmer, Jr. was one of the greats of our “greatest generation.” Hastings Funeral Home is entrusted with arrangements and online condolences can be made online at www.hastingsfuneralhome.com.