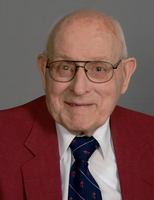 Odell C. Miller of Morgantown, West Virginia passed away from natural causes on January 13, 2021 at the age of 91. Miller grew up in Shenandoah County, Virginia. He served in the U.S. Army during the Korean War. He graduated from Berea College in Berea, Kentucky at the age of 20. He later obtained a master's degree in agronomy from The Ohio State University. He also completed additional graduate courses at Oklahoma State University. Miller spent much of his career teaching vocational agriculture at the high school level and advising the Future Farmers of America (FFA) chapters at those schools. He taught in Winchester, Virginia, where he met his wife; at Northwestern High School in Raymond, Ohio; and then at Marysville High School in Marysville, Ohio. Later in his career, he taught agriculture education students at The Ohio State University, from which he retired. After their respective retirements, he and his wife moved to her hometown of Morgantown, West Virginia. A variety of Mr. Miller's students earned the American Farmer degree, one of the highest honors in the FFA. He was elected president of the FFA Alumni, and he also was elected as a national vice president of the National Vocational Agricultural Teachers Association (NVATA). Mr. Miller was an avid woodworker, and he gave many wooden pieces to his family, friends and colleagues. When living in Ohio, he was an active member of the Raymond United Methodist Church. After moving to West Virginia, he was an active member of the Spruce Street United Methodist Church in Morgantown, West Virginia. He was a long-time member of the Methodist Men organization there. In Ohio, he was also a member of the local Kiwanis Club, while in Morgantown he was a member of the local Lions Club. His wife, Mary Margaret Hastings Miller, died in March of 2017. Miller is survived by his son, Mark C. Miller, of Worcester, Massachusetts and his son, Lynn H. Miller, of Ft. Worth, Texas. He is also survived by his daughter-in-law, Wendi Miller, and his grandchildren, Aubrie, Hope, Virginia, and Melody Miller, all of Ft. Worth, Texas. He is also survived by his brother, Kyle L. Miller, of Stanley, Virginia. Cremation services were performed by the Hastings Funeral Home/Omega Crematory in Morgantown, WV. A memorial service will be held at Spruce Street United Methodist Church, 386 Spruce Street, Morgantown, on Friday, June 11, 2021, beginning at 11 a.m. Donations in his honor may be made to the Roof Fund at Spruce Street United Methodist Church in care of the SSUMC Trustees. Send condolences online at wwwhastingsfuneralhome.com