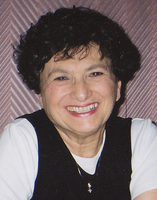 Frances J. Nelson passed away peacefully on July 26, 2021. A Memorial Mass with Mausoleum service will be held in Morgantown at St. Mary Roman Catholic Church, 3334B University Avenue, on Saturday, October 16, 2021, at 11:00 a.m., with a luncheon to follow afterward in the Peace Hall. Please RSVP regarding the luncheon to rdonoho@comcast.net. In lieu of flowers, those wishing to honor Fran may make donations to St. Jude Children’s Research Hospital, 501 St. Jude Place, Memphis, TN 38105-9959, or ASPCA, Gift Processing Center, P O Box 96929, Washington, DC 20077. Frances J. Nelson passed away peacefully on July 26, 2021. Fran was born in Rockford, Illinois on September 16, 1929, the youngest of six children born to Sam and Mary Cerniglia, who had immigrated from Sicily in the early 1900s. Her siblings (Angela, Paul, Jack, Rosalie and Joe) affectionately called her "Babe". Fran was raised during the Depression, in a home filled with love and many Italian traditions that centered around family meals and delicious foods. She enjoyed growing up as a member of a large extended family, all who lived within her neighborhood. A few years after graduating from Muldoon High School, Fran married William R. (Bob) Nelson (1926-1990). Fran was a wonderful full-time mother to their four children, David, Beth, Kevin and Rachel. The family lived in numerous cities over the course of Bob's career as a biochemist: San Antonio, TX; Alexandria, VA; Long Island, NY; Wilmette, IL; finally settling in Morgantown, WV in 1979. Fran became a very successful real estate agent in the Morgantown area, working into her 80s. For a number of years, Fran and Bob also owned an art print and framing shop in Morgantown. Sadly, in 1990 Fran lost her husband of 40 years when Bob passed away suddenly. Fran was a warm, fun-loving, charismatic and vibrant woman, remaining young at heart by finding joy in her life and in her time with family and friends. She was an avid movie buff, especially of classic Hollywood films, and she loved to sing and dance (her 70th birthday was celebrated with a very memorable karaoke party). She was a long-time fan of Judy Garland and Frank Sinatra. Fran was known as a fabulous cook (she belonged to a gourmet club for a number of years), and her sense of good taste and style shone through in all she did. Fran had a large circle of treasured, long-time friends. She was a beloved mother, Nana and great-Nana. Fran will be missed beyond measure by her family and friends. Frances is survived by her children, David (Jody) Nelson, Beth (Dennis) Houseknecht, Kevin (Kim) Nelson, Rachel (Robert) Donoho; her grandchildren, Meleah (Seth) Houseknecht Binder, Amariah (Kurt) Houseknecht Cornwell, Abigail (Travis) Houseknecht Woods, Robert Houseknecht, Sarah (Kyler) Goodwin, Cooper Donoho, Ryan Donoho, Carly Donoho, Michael Donoho; six (soon to be seven) great-grandchildren; and many nieces and nephews. Hastings Funeral Home is entrusted with arrangements. A Memorial Mass will be held in Morgantown on October 16, 2021 at 11am at St. Mary’s Catholic Church. In lieu of flowers, those wishing to honor Fran may make donations to St. Jude Children's Research Hospital, 501 St. Jude Place, Memphis, TN 38105-9959, ASPCA, Gift Processing Center, P O Box 96929, Washington, DC 20077. Send condolences online at www.hastingsfuneralhome.