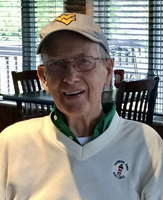 Dr. John Henry Dempsey, 90, of Morgantown, WV passed away on Thursday, September 23, 2021, at his home with his family by his side. He was born in Lewisburg, WV, on September 3, 1931, the son of Raymond Lawrence and Frances Preston Dempsey. He lived with his grandparents, James M. and Frances Flourney Preston, in Lewisburg after the death of his father. He graduated from Lewisburg High School in 1949, where he excelled in all sports. He graduated from The Greenbrier Military School in Lewisburg in 1950. He went to undergraduate school at West Virginia University in Morgantown, WV, graduating in 1953. He was a member of the Sigma Chi Fraternity while at WVU. He went to the Baltimore College of Dental Surgery (now the University of Maryland School of Dentistry) in Baltimore, MD, where he graduated in 1957. At the end of his dental school, he did a residency at the Jersey City Medical Center, in Jersey City, NJ where he met his wife Sally. John practiced dentistry briefly in Montgomery, WV, and then moved to Morgantown, WV where he partnered in dental practices in downtown Morgantown on Spruce Street and High Street. After many years of practicing dentistry in Morgantown, John went to the WVU School of Dentistry's Department of Orthodontics where he graduated in 1974. As an orthodontist, he had several private practices in Morgantown (Suncrest, downtown Morgantown, Cheat Lake) and a practice in Kingwood, WV. He always felt it was easier for him to set up a practice in his patient's location, rather than have the parents drive their kids across town for braces and procedures. Throughout his private practice career in Morgantown, John also taught courses at the WVU School of Dentistry and Department of Orthodontics up to the time of his retirement at 80 years of age. John was surrounded by wonderful colleagues, family, and friends during his career and throughout his life. He was known as a hard-working, easy going, compassionate person, and always generous with his time and support. He was easy to talk to, and always had time for a good story or joke. He loved to reflect and tell stories about his youth in Greenbrier County WV, an area he loved. He was an instructor and counselor at Camp Shaw-Mi-Del-Eca, a summer camp for boys located between White Sulphur Springs and Lewisburg, WV along the Greenbrier River. He also worked with his brother Dicky as tour guides in the Organ Cave, an historic natural cave in Greenbrier County, WV. In his earlier years in Morgantown, John and his wife were members of the Morgantown Country Club, then original members of the Pines Country Club beginning in 1970 where they enjoyed playing golf, tennis, and hanging by the swimming pool with family and friends. They enjoyed dancing, and often frequented the former Cotillion Dance Club in Morgantown. John was very active as a WVU alumni with the Touchdown Club of Morgantown and was President of the club from 1965 to 1966. He enjoyed family vacations on the Jersey shore, and spending leisure time at the lake house on Rockley Road in Cheat Lake. John was very involved with his children's high school athletic events. He was a mentor and a proud supporter of the kids and the school. He was typically at the games and often had the kids and their parents to his house after the game to share the stories and game activities. He always followed WVU football and basketball, from the stands at Old Mountaineer Field, Milan Puskar Stadium and the Coliseum, and then on TV in recent years. He was a proud Mountaineer fan. Even in loss, he voiced the lessons learned for the players of the game. In retirement years he travelled to Lewisburg and The Greenbrier Resort in White Sulfur Springs to see the old sites. Not too long ago he made a trip to Alaska and flew on a float plane which had always been on his to do list. In his most recent years, he was comfortable in his home watching his favorite shows or sports, or listening to his favorite music, and was most comforted knowing that his family and close friends were healthy and well. He is survived by his four children, John Dempsey of Bluffton, SC, David Dempsey of San Francisco, CA, Emily Dempsey of Charlotte, NC, and Thomas Dempsey of Morgantown, WV; sister-in-law, Betty Joanne Dempsey of Lewisburg, WV; half-sister, Dr. Jean F. McClung and her husband John Morris, of Pittsburgh, PA; niece, Rev. Joanne Dempsey Glaser of Lexington, NC and her husband Timothy Glaser; and three grand nieces, Benjamin Glaser, Elizabeth (Glaser) Troyer, and Patricia (Glaser) Johnson and their respective spouses. In addition to his parents, he is preceded in death by his wife, Sally Ann Dempsey, who passed away on Dec 18, 2018; brother, Raymond Lawrence Dempsey Jr., 'Dicky', of Lewisburg who passed away on Sept. 20, 2011; and first cousin Luther James Dempsey Jr., of Morgantown who passed away on Dec. 19, 2014. Hastings Funeral Home is entrusted with cremation arrangements. A private entombment will take place at St. Mary's Peace Garden Mausoleum in Star City. A Celebration of John's life will be held on Saturday, November 13, from 1PM to 4PM, at the Erickson Alumni Center, 1 Alumni Drive, Morgantown, WV 26506. His family would like to invite everyone to please bring photographs or stories to share. A separate celebration will be held later in Greenbrier County, WV, as per John's wishes. In lieu of flowers, donations can be made to WVU School of Dentistry, or to St. Ursula's Food Pantry and Outreach, PO Box 18, Pursglove, WV 26546. For those wishing to make donations to the WVU School of Dentistry, gifts can be made in support of the Dr. John H. Dempsey Orthodontic Scholarship (Fund #3Z496) and sent to: WVU Foundation, One Waterfront Place 7th Floor, PO Box 1650, Morgantown, WV 26507. The fund benefits students in the Orthodontic residency program. For more information, please contact Karen Coombs at 304-216-3784. Personal condolences and other symbolic gestures may be offered to the family by visiting www.hastingsfuneralhome.com.