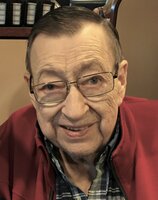 Roy James Stevens, 89, passed peacefully on Sunday, November 14, 2021, at Fairfax Hospital in Falls Church, Virginia. Roy was born on January 26, 1932, in Medina, Ohio, son of the late Vincent Stevens Sr. and Grace Rachel Stevens. He graduated from St. Francis High School in 1949 and served in the U.S. Navy during the Korean War as a Hospital Corpsman second class on the U.S.S. St. Paul. This experience led him to pursue a degree in medicine. Upon returning to the states, he enrolled in West Virginia University, where he received his undergraduate and medical degrees and then went on to do his internship and residency at Indiana University in Indianapolis. He returned to Morgantown in 1968 and began his long career as an OB-GYN until his retirement from obstetrics in 1987 and from gynecology in 1997. He resided in Morgantown until 2015, when he moved to Virginia to be close to his children. Roy is survived by his son Bryan Stevens, wife Karen Bressler, and granddaughters Grace Mallorie Stevens and Emily Rose Stevens; son Michael Stevens and wife Sherry Malata; daughter Beth Stevens; niece Cynthia Stevens; nephew John Robert Stevens Jr. and wife Debra Stevens; and nephew James B. Davis. In addition to his parents, he was preceded in death by his beloved wife Helen Dasculink Stevens; his brother Vincent Stevens Jr. and wife Martha; and his brother John Robert Stevens and wife Doris. Private family services will be held at East Oak Grove Cemetery to be buried alongside his wife, Helen Dasculink Stevens with Hastings Funeral Home entrusted with arrangements. The family asks that, in lieu of flowers, donations be made in Roy’s memory to St. Francis Central Catholic School, 41 Guthrie Lane, Morgantown, WV 26508. Send condolences online at www.hastingsfuneralhome.com