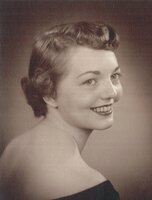 Sharon McCoy Garvin, age 86, of Morgantown, passed away on Tuesday, December 7, 2021, after a brief illness. She was born on April 7, 1935, in Kissimmee, FL, daughter of the late Dan and Virginia (Wolverton) McCoy of Ravenswood, WV. Sharon grew up in Jackson County, WV, graduated from Ravenswood High School in 1953, then obtained her Dental Hygiene Certificate from West Liberty State College in 1955. She began her career in Arlington, VA, where she met her future husband, William J. “Bill” Garvin, who was from Morgantown, but at that time was in the United States Air Force stationed at Bolling Air Force Base in Washington, DC. They were married in 1956 in Sharon’s home “The Lone Star Farm” near Waynesburg, PA. Shortly after their marriage, the couple returned to Morgantown. They would have celebrated their 65th wedding anniversary on Christmas Day 2021. During those years, Sharon was a dental hygienist for Elias Costianes, DDS. Upon Bill’s graduation from WVU, the couple moved to Putman County, WV, where Sharon was employed by Putnam County, specifically to help in the establishment of the first county wide dental health program for elementary students. She organized a dental clinic and arranged school bus transportation for all third grade students to the dental clinic for free dental x-rays. She enlisted dentists to provide cleaning and treatment for those students in need. She coordinated and arranged for her visits to the thirteen elementary schools within the county to provide dental health education, one of the schools still being a “one room school”. Sharon and Bill returned to Morgantown in 1974, where Sharon returned as dental hygienist with Dr. Costianes until his retirement. In January 1991, she continued her dental hygiene career with Dr’s Louis and Chris Giuliani of Westover until her retirement in 2015. She proudly retired at age 80 after 60 years as a dental hygienist. She was a former member of the National Dental Hygiene Association and the West Virginia Dental Hygiene Association. She was also a 50 year and current member of the Order of the Eastern Star, Chapter 64 of Bethany, WV. Sharon was known as a giving and caring, warm and accepting wife, mother, grandmother, and friend. She advised some and was a non-judgmental listener. She gave words of encouragement and loved to give and receive hugs. She had a generous heart and considered the girls and family at Giuliani Dentistry as a part of her extended family. She was blessed to have many friends “as she laughed and said” because she considered many of her patients her friends. She considered her 60-year friendship with Sally Holliday as a wonderful blessing from God. She thought of Sally as her sister. In addition to her parents, she was preceded in death by her brother, James L. McCoy, PhD.; nephews, Mike and Matthew McCoy and sister, Phyllis and husband, C. Robert McCall and nephew, John McCall of Waynesburg, PA. Sharon in survived by her husband, William “Bill” Garvin; a son, Kent (Rebecca) of Morgantown; a daughter, Staci Kisner of Morgantown; grandsons: Jared Garvin, Chad Kisner; great grandson, Kaeson Kisner and granddaughter, Cortney Kisner. In keeping with her wishes, cremation services will be provided. Friends and family will be received at the Foundry Church, 432 High Street, Morgantown, on Friday, December 17th from 9:00 AM until the time of the Memorial Service at 11:00 AM with Pastor Justin Myers and Pastor Mark Ransom officiating. In lieu of flowers, donations are encouraged to be made in Sharon’s behalf to Star City Volunteer Fire Department (SCFD) Scholarship Fund, PO Box 4235, Star City, WV 26504. Hastings Funeral Home is entrusted with arrangements on online condolences may be made online at www.hastingsfuneralhome.com