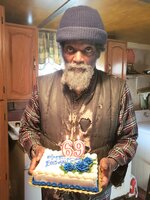 Richard Howard Fuller, 69, of Chaplin Hill Road, in Morgantown, left this world on Wednesday, December 22, 2021 unexpectedly after enduring kidney failure complications after heart surgery. Richard, also known to his buddies as “Hook”, “Fuller Brush”, or “Fuller”, was born in Morgantown on January 12, 1952. He spent his years growing up and living in the Chaplin/Osage area and graduated from University High School. He was an outstanding athlete in both basketball and football--a powerhouse to be reckoned with. Richard is survived by his partner of 42 years, Betty Hewitt of Morgantown and their only child, his pride and joy, their daughter, Tanya Renee Fuller, also of Morgantown, and his beloved dog, Zoey. He is also survived by two half-sisters, several sister in-laws and some very special nieces and nephews. Richard was preceded in death by his parents, John and Ernestine (Anderson) Fuller. Richard was a coal miner for 48 years. He worked at Pursglove #15 Mine and retired from Robinson Run Mine. Richard was also the curator at the Scott’s Run Coal Museum in downtown Osage and an active UMWA member. Richard, who was known as an advocate for racial equality and human rights, actively supported and fought for justice and change. He participated in numerous rallies and standing on the picket lines, bringing coffee and doughnuts, and talking with fellow union members for what he believed in. Never one to back down from an injustice, Richard won at that time the largest discrimination suit ever awarded a black man in the state of West Virginia within the coal mining industry. Richard was routine in nature and a homebody. He enjoyed deer hunting, walking the woods, playing his lottery numbers, watching WVU sports and his favorite team, The Pittsburgh Steelers. He could be found at the “shop” with his buddies, Paul and Robert, visiting with the truck drivers and anyone who stopped by telling stories and laughing. He will be greatly missed by friends and family and talked about for years to come. “Don’t give in, don’t give up, we are Fuller tough!” Friends and family will be received at Hastings Funeral Home, 153 Spruce St., on Friday, December 31, 2021 from 2 p.m. until the time of the Celebration of Life at 5 p.m. In accordance with his wishes, cremation services have been provided by Hastings Funeral Home/Omega Crematory. Send condolences online at www.hastingsfuneralhome.com