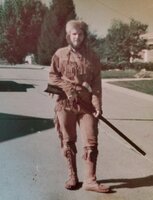 Junior Russell Taylor, Jr., 66, of Morgantown, passed away on Wednesday, January 5, 2022, at his home. He was born on January 6, 1955, a son of the late Junior Russell Taylor, and the late Evelyn Inez (Cottrill) Anderson. Junior graduated from WVU with a Master’s degree in Business and Management and a Masters in Safety. He also graduated from Master of Divinity Degree from Oral Roberts University. Throughout his life, he was a self-employed businessman and minister. Junior was well known as a WVU super fan and a proud past WVU Mountaineer. He was the most devoted mountaineer who lived and breathed West Virginia. Without a doubt, we have truly lost one of the best. He is survived by his wife, Viktoriya Taylor; son, Vlad Taylor; siblings, Roxanne Sterling of Jupiter, FL, Carolyn Taylor of Morgantown, WV and Kathleen Huffman of Bridgeport, WV; and brother-in-law, David Clise along with many nieces and nephews. In addition to his parents, Junior is preceded in death by grandmother, Flossye Cottrill; sister, Rosanna Clise and brother-in-law, Ronald Huffman. In accordance with his wishes, cremation services will be provided by Hastings Funeral Home and a family gathering will be announced at a later date. Donations may be made in Junior’s memory directly to the family at www.givingcompassion.care.