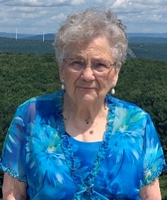 Goldie B. Lewis, 87, of Morgantown, West Virginia gained her heavenly wings and entered the gates of heaven on Wednesday, January 12, 2022, at Mon Health Medical Center. She was born on August 15, 1934, the daughter of the late Ernest Grant and Goldie (Goodwin) Wolfe. In addition to her parents, Goldie has been reunited with the love of her life, Dave, her sons David W Lewis, Jr and John B Lewis, brothers Alfred, Howard, Frank, Fred, and Raymond. Goldie was a loving mother, sister, grandmother, and a loyal friend to all of those lucky enough to have known her. Goldie retired from Morgan shirt factory after working in the factory for 35 years. She lovingly cared for her children and grandchildren and enjoyed spending time with all of them. She even helped others by babysitting so their parents could work. After retirement, she and her late husband Dave founded "Dave's snack shack" which was located on the Deckers Creek rail-trail between Morgantown and Masontown. They were always sitting on the porch waiting for someone to stop by for a quick drink, an ice cream or just to chat for a bit. Goldie is survived by her sister Carolyn Chidester of Reedsville, West Virginia and brother Glenn (Linda) Wolfe of Masontown. Her five children and spouses Donna (Carl) Mayfield of Springfield, West Virginia, Wanda (James) Martin of Morgantown, West Virginia, Ernie (Beth) Lewis of Fairmont, West Virginia, Debbie (Randy) Wilson of Morgantown, West Virginia and Cathy (Ray) Hurt of Morgantown West Virginia and many precious grandchildren, great-grandchildren and great-great-grandchildren whom she loved dearly. She also leaves behind many nieces, nephews and extended family and friends Friends and family will be received at Nicholson Chapel Church, 1346 Summers School Rd., Morgantown on Saturday, January 15, from 2:00 pm until 6:00 pm. Visitation will continue on Sunday, January 16, from 10:00 am until the time of the funeral service at 11:00 am with Tess Hovatter officiating. Interment will follow at Nicholson Chapel Cemetery. In lieu of flowers, donations may be made in her memory to Nicholson Chapel, 1346 Summer School Road, Morgantown, WV 26508, or SteppingStones located at 400 Mylan Park Lane, Morgantown, WV 26501. Send Condolences online at hastingsfuneralhome.com