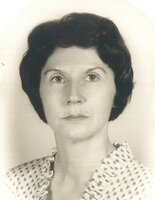 Reba Louise (Withrow) Kirk, 95, of Morgantown, passed away Thursday, January 13, 2022 at Stonerise of Morgantown. She was born August 5, 1926 in Charleston, West Virginia, a daughter of the late Etley and Emma (Edens) Withrow. In 1964, Reba and her husband Eddie moved from Charleston, West Virginia, to Morgantown with their three children. From the beginning of her time in Morgantown, Reba enjoyed making frequent trips to the Morgantown Public library to borrow books for herself and her husband. Reba was constantly enriching her adult life via art lessons at age 40, piano lessons at age 50, and then earning her driver’s license at 70. In addition to art and piano lessons, Reba enjoyed traveling to visit her sisters, who lived as close as Ohio and as far away as Hong Kong, even though she hated to fly. She belonged to the Morgantown Church of God for many decades. She was a long-time member of the Morgantown Art Association and was proud to have her work included in their juried exhibits. She enjoyed line dancing with the Senior Shufflers at the Mountaineer Mall until the age of 90 and then continued lunching with her Senior Monongalian friends. Most importantly, Reba was the center of the family with her loving and generous heart. Reba is survived by her two daughters and their husbands: Kerry L. and Daniel Black, and Kristina G. and Kenneth Potter; seven grandchildren: Jason K. Black, Katy R. and Drew Phillips, and Emily R. Black; Krystal D. Potter, Joseph M. Potter and his wife, Shannon Rigdon, Sarah L. Potter, Anna K. Potter. Reba also had the joy of having three great-grandchildren: Kirk C. Black, Arwin L. and River R. Phillips. In addition, surviving is Reba’s only cousin, Patty Ellen (Withrow) Ewing. She was preceded in death by the love of her life, Walter Edward Kirk, Jr., who passed away in 1997; her only son, Charles A. Kirk; and a grandson, Clinton K. Kirk and five siblings. Her family wishes to thank her neighbors for their continued support and friendships. Friends and family will be received at Hastings Funeral Home, 153 Spruce St., Morgantown, on Wednesday, January 19th from 4-7 PM and again on Thursday, January 20th from 10 AM until the time of the funeral service at 11:00 AM with Brother Bill Kittle officiating. Interment will take place at Lawnwood Cemetery. It is recommended for all guests to wear masks. Flowers are appreciated, or please consider donations in her memory to On Eagles’ Wings, 371 Opekiska Ridge Rd, Fairmont, WV 26554, or online at https://www.oneagleswingswv.org/donate. Send condolences online at www.hastingsfuneralhome.com