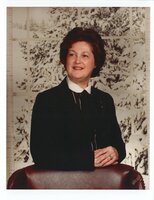 Betty Lee Truman died peacefully in her sleep on February 23, 2022. She was born January 28, 1928 in Lost River, West Virginia, where she grew up on the family farm. She graduated from Mathias High School, valedictorian and attended Potomac State University, where she met her future husband Bill Truman. He boarded from a woman who gave Betty piano lessons. They were married in 1948 in Oakland, Maryland. Later, they both graduated from WVU, where she received a degree in business administration. After living for some time in Spencer, Wheeling and Fairmont, Betty and Bill moved to Morgantown in 1962. She soon began working for Job Service West Virginia, and for years served as the manager. Betty organized the Monongalia County Veteran’s Task Force, which received numerous state and national honors. She retired in 1988. Betty and Bill lived in Morgantown the rest of their lives. She enjoyed her family, travel, big Christmas gatherings, cooking, yard sales, the outdoors and flowers. She began a long hobby, and small business, pressing local wildflowers into beautiful notecards, framed pictures and wedding announcements. These were requested by friends or sold at craft stores, including Penn Alps in western Maryland and Tamarack in Beckley. Betty was a very active member of Spruce Street United Methodist Church and taught children’s Sunday School. She was also a member of P.E.O. Chapter B and served as chapter president. She was a pianist for Eastern Star and often played at services for Lost River United Methodist Church. She was a den mother for a Cub Scout troop in Fairmont. In eighth grade, she earned the West Virginia Golden Horseshoe Award. She was preceded in death by her mother and father, Gladys and Henry Hawse and her loving husband Bill. She is survived by her three children, William Maurice (wife Sandy), James Byron (wife Gale) and Elizabeth Ann Guiser (husband Ray). Her grandchildren include William and Sandy’s children Michael, Amy Adkins (husband Andrew and their son Avram), Susan Truman-Schmitt (husband Ammon) and Carrie; and James and Gale’s son Andy. She will be missed dearly by her family, who would like to thank her wonderful caregivers. A private family service will be held at Hastings Funeral Home and interment will take place at Greenwood Cemetery, near her family farm in Lost River. In lieu of flowers please consider donating to Spruce Street United Methodist Church, 386 Spruce Street Morgantown, West Virginia 26505 or Lost River United Methodist Church 6636 WV Rt. 259, Baker, West Virginia 26801 Online condolences may be made at www.hastingsfuneralhome.com