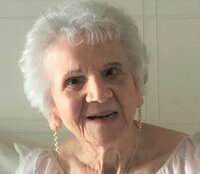 Roseann DeBiase, who passed away on March 23rd in Morgantown, lived out her 98 years with an unwavering devotion to her family, and a remarkable independence long before many women of her generation recognized their equal status. She ran her household with maternal pride and consistent managerial resourcefulness. She served as co-equal partner and best friend to her husband of forty years, and raised their three children with great care and diligence, instilling in each of them her compassionate concern for others and a clear if occasionally ironic insight about the human condition. As selfless and self-effacing as she was, Roseann had a passionate nature and a great many loves in her life. An incomplete list would include: her beloved husband and the relentless laughter he brought into her life for the entire 40 years of their marriage; her three children and her daughter-in-law Christina; family reunions with her siblings; her daily crosswords; her Steelers and her Mountaineers; Jeopardy game show clues she got before the three contestants did; weekly poker games with lifelong women friends; daily phone conversations with her children in Morgantown and California, and with her adored niece Mary Anne in Texas; cheez-its and potato chips and nuts on the last weekend of the month she allowed herself a junk food binge; poems she wrote throughout her life about the people and places that mattered most; dancing ‘til midnight on countless Saturday nights at the Old Mill, Elks, and Beaumont clubs in the arms of her suave , smooth stepping husband. A confidante to whom you could faithfully entrust your secrets, Roseann always had an open heart with deep tolerance and respect for the many friends and family who sought her non-judgmental counsel. When she became a widow and lived alone, her fierce autonomy and self possession lent to her longevity a continuing purpose and vitality, even in her 99th year. Until the last week of her life, she maintained her uncanny athletic dexterity, bounding up and down the long stairways to her bedroom and basement. She was a competitive and skillful game player for many decades , who indicated her only regret in life was coming in second place in her high school ping pong tournament. Roseann was born on December 20, 1923, in New Kensington, Pennsylvania, daughter of the late Felix and Anna Pessolano. She is survived by her children, Denise Marie DeBiase, Dennis Andrew DeBiase and his spouse Asa Pritchet, and Daniel Francis DeBiase and his spouse Christina, as well as dear local friends and beloved nieces and nephews across the country. In addition to her parents, Roseann is also preceded in death by her loving husband, Frank Albert DeBiase, and her five siblings Kitty, Jim, Mary, Bae, and Art. There will be a private graveside burial service at Beverly Hills Memorial Gardens with the Reverend Father John DiBacco officiating. She will be laid to rest alongside her husband Frank DeBiase. Donations in her name can be made to charities she supported: St Jude’s Hospital, 501 St. Jude Place, Memphis, TN 38105-9959 (www.stjude.org) and Animal Friends of North Central West Virginia, P O Box 1090, Dellslow, WV 26531 (www.animalfriendswv.org). Send condolences online at www.hastingsfuneralhome.com