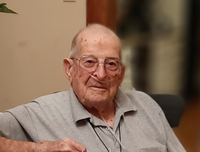 Kenneth Paul McBee, 99, of Morgantown, passed away peacefully on Thursday, July 28, 2022 at his home. Kenneth was born in Smithtown, WV on February 19, 1923, the son of the late Lloyd and Margaret McBee. Kenneth enlisted in the US Army and deployed to the European theatre during WWII serving in France and Germany. After returning home from the war, he and his father established a dairy farm in Mon County. Although he loved farming, he also worked as an electrician at Sharon Steel in Fairmont and then Union Carbide in Anmore, WV. Long after he retired from working in industry, he continued to operate a beef cattle farm into his 90's. Kenneth was a life-long member of Johnson Chapel United Methodist Church, where he was a trustee for many years. He was a member of the Mon County Farm Bureau for over 50 years. He also enjoyed participating in the Smithtown Community activities. Kenneth married Betty Lou Swisher in Oakland Maryland in 1955 and continued in marriage for 66 years until her passing in 2021. Kenneth is survived by his children: Doug McBee and his wife Susan of Pittsburgh; Kelly McBee and her husband Brian Boggess of Morgantown; and Ralph McBee and his wife Michele of Morgantown; grandchildren: Amanda Hoover and her husband Adam, Justin McBee, Breanna Boggess, Jackson Boggess, and Seth McBee; and great-grandchildren, Addison and Scarlett Hoover, whom he adored. He is also survived by brothers-in-law and sisters-in-law that he loved as family, and many nieces and nephews on both sides of the family. Kenneth was the last surviving member of his family having been preceded in death by his brothers and their wives: Lawrence and Rita McBee; Jim and Dean McBee; and his sister and her husband Edna and Bernard "Bun" Malone. Friends and family will be received at Hastings Funeral Home, 153 Spruce St. Morgantown, on Tuesday, August 2nd from 2-4 pm and 6-8 pm. Visitation will continue at the funeral home on Wednesday, August 3rd from 10 am until the time of the funeral service at 11 am with Pastor Lawrence Rebelo officiating. Burial will follow with full military honors at Pisgah Cemetery on Rt. 73. Send condolences online at hastingsfuneralhome.com .