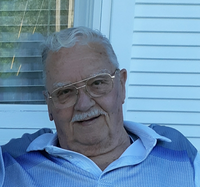 Charles David Stimmell, 84, of the Kingwood Pike passed away at home on Sept 2, 2022, surrounded by his loving family. He was born in Morgantown on April 4, 1938, to the late Viola 'Teet" Stimmell Stewart. Charles was raised by his grandparents the late Jim and Ethel Walker. Chuck was a U.S. Army Veteran. He was a truck driver and owned and operated Stimmell Trucking for over 40 years. He was also a longtime member of Glorybound Tabernacle on the Kingwood Pike. He is survived by his loving wife of 65 years Pastor Norma Stimmell, his niece whom he considered a daughter Brenda Hendershot and husband George, foster daughter Helen Lemasters and husband Jesse, sister Margaret Ellen Lewis, special nieces Kelly Zinn, Kristin Nicholson and children Greyson, Remi and Kady, sister-in-law Martha Hart, his 'kids" Bob and Carol Clark and special neighbors Dale and Nelvie Blosser, many nieces and nephews, his church family and his fur baby Chloe. He was preceded in death by his stepfather Carl Stewart, brother James "Joe " Walker, in laws Pat and Gertie Gilmore, niece Nikki Livengood and nephew Charlie Hart. Friends and family will be received at Glorybound Tabernacle, 2250 Kingwood Pike, Morgantown, on Tuesday, September 6th from 3 PM until the time of the funeral service on Wednesday, September 7th at 1:00 PM with Pastor Gwen McKinley and Pastor Gary Blosser officiating. Interment will take place at Mt. Pleasant Cemetery with full military funeral rites being conducted at the graveside. Hastings Funeral Home has been entrusted with arrangements and online condolence may be made at www.hastingsfuneralhome.com.