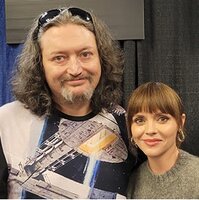 Sean Anthony Murphy 1966-2022 Sean Anthony Murphy (Murph), 56, of Morgantown, West Virginia, passed away Wednesday, December 28, 2022, peacefully, at home. Sean was born at Walter Reed Memorial Hospital in Washington D.C., the son of the late Robert Lawrence Murphy and Lois Ann Tatich Murphy, on May 20, 1966. One of three children, he moved to Morgantown with his family in 1970. He attended Morgantown High and graduated from St. Francis High School in 1984. A talented artist and performer from childhood, he earned a fine arts degree in painting from West Virginia University. He went on to earn graduate degrees in Safety Management from WVU and in Library Science from the University of Pittsburgh. He worked at the West Virginia University Libraries and Fairmont State College Library. Following that, he was a care-giver for his mother Lois for many years until her death in 2019. Sean particularly enjoyed preparing her favorite meals with great care. He was a cult movie enthusiast and avid collector of Godzilla memorabilia. A talented special effects and make-up artist, he performed as a host for Halloween shows as his character Dr. Murph. He enjoyed eating out and secretly picking up the bill for first responders. Sean loved animals of all kinds. His companions included cats, a snake, a tarantula, and dogs including three ex-racing greyhounds. He is survived by his sister Mary Erin (John David) Roberts of The Villages, Florida, beloved nieces Mary Catherine Roberts of Hanover, Pennsylvania and Alison Meredith Roberts (Joseph) Barone of Marlboro, Massachusetts, and two grand-nephews. Sean is also survived by his former wife and dear friend Beth Toren, of Morgantown. He will be missed every day. In addition to his parents, he is preceded in death by his brother Michael Robert Murphy, who died from a serious ailment at 34. A Panachida service was held at the Saint Nicholas Orthodox Church, Barton Ohio, on January 8. A memorial service and inurnment will be held at a later date. Arrangements are entrusted to Hastings Funeral Home. ~ Blessed are you, Lord our God, in all your creatures! ~ In lieu of flowers, the family asks that you make a memorial donation to Animal Friends of North Central West Virginia http://www.animalfriendswv.org/. The family wishes to extend their gratitude to Doctor Benita Wu at the WVU Department of Medicine for going above and beyond to provide care. The family would also like to give a special thank you to Jeff Ryan and Kurt McCoy for their help at the time of need. Send Condolences online at hastingsfuneralhome.com