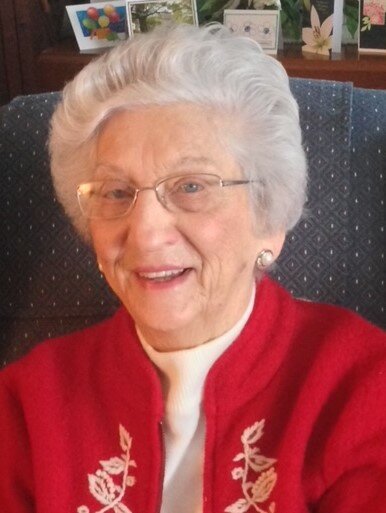 Please share a memory of Mary to include in a keepsake book for family and friends.
View Tribute Book
Mary Jane Glasscock, 105, of Heritage Point, formerly of South Park, Morgantown, departed this life Friday, January 21, 2022, at her residence. She was born November 24, 1916 in Moundsville, WV, a daughter of the late George Phillip and Anna Pearl Westerby Wasmuth. She graduated from Moundsville High School in 1934. From 1935-37, she attended Stratford Junior College for Women in Danville, VA. After receiving her certificate there, she came to West Virginia University to complete her bachelor's degree in Music Education in 1939. She began her teaching career at Mercer School in Princeton, WV. In 1943, she returned to Morgantown to teach music and supervise student teachers at University High School and the Laboratory Elementary School. She held this position until 1955, although she took a year’s sabbatical in 1952-53 to work for the Ginn Book Company, where she traveled in West Virginia and Kentucky to showcase their music books. In 1955, she moved to the College of Education at WVU and continued supervising music and elementary education student teachers until her retirement in 1978. During this time, she also taught recreational music to students majoring in Recreation. Graduate study while she was at University High School included completion of a master’s degree in Music Education from WVU in 1947, and further graduate work at Columbia University in New York during the summer of 1950. She was a member of Wesley United Methodist Church for over fifty years. She was also a member of several other organizations, including the Women’s Club of Morgantown, the Delphian Book Club, and the Morgantown Music Club, serving as its president in 1968-70. She was a former member of the Alpha Delta Kappa education honorary and of Alpha Phi social sorority. She was a life member of both the Monongalia General Hospital Auxiliary and the Friends of West Virginia University Hospital, accruing over 2,000 hours as a volunteer at the Ruby Memorial Information Desk. She was also a life member of both the West Virginia University Alumni Association and the WVU Emeritus Club. She was active in the West Virginia State 4-H program for many years as a member, leader, and All Star. She represented West Virginia at National 4-H Club Congress in Chicago in 1934 as the state winner in Complete Costume. She served as a county and state 4-H camp instructor, as well as a hostess at Jackson’s Mill State 4-H Camp, during the summers of 1939-1953. In the early 1950s, she compiled and edited the first published West Virginia 4-H Song Book. She was inducted into the West Virginia 4-H Hall of Fame in 2004. One of her hobbies was needlepoint, and she was one of twenty women selected in 1974 to needlepoint a chair seat cover for the dining room chairs at the West Virginia Governor’s Mansion. She was married to Benjamin L. Glasscock on August 22, 1953, and they enjoyed 55 years of marriage together before his passing in 2009. She is survived by a daughter, Susan Jane Arnold, and her husband, Stephen E. Arnold, of Morgantown, and several nieces and nephews: Janie Coolidge of The Villages, FL; Phillip Woodruff and his wife Carolissa of Glen Dale, WV; Bruce Woodruff and his wife Sue of St. Clairsville, OH; Tom Woodruff of Moundsville, WV; Betsy Hill and her husband Richard of Fort Lauderdale, FL; Lynda Ruckman of St. Petersburg, FL; Nancy Ruckman of Riverview, FL; Jack Glasscock and his wife Nancy of Moundsville, WV; and Scott Glasscock and his wife Georgeann of South Charleston, WV. She was the last surviving member of her family. In addition to her parents, she was preceded in death by a brother, George Wasmuth, and three sisters, Gladys Knapp, Phyllis Woodruff, and Anna Lucille Ruckman. Mary Jane Glasscock, 105, of Heritage Point, formerly of South Park, Morgantown, departed this life Friday, January 21, 2022, at her residence. A service of remembrance is scheduled for Sunday, April 24, 2022 beginning at 2 pm at Wesley United Methodist Church, 503 N. High Street, Morgantown, with Rev. Martha Ognibene officiating. In lieu of flowers, memorial donations may be made to Wesley United Methodist Church, 503 N. High St, Morgantown, WV, 26505, or to the WVU Foundation (No. 2V620) P.O. Box 1650, Morgantown, WV, 26507 to be used for the WVU Jackson’s Mill Restoration Fund. Online condolences may be made to the family at www.hastingsfuneralhome.com.
To plant a beautiful memorial tree in memory of Mary Glasscock, please visit our Tree Store

Look inside to read what others have shared
Family and friends are coming together online to create a special keepsake. Every memory left on the online obituary will be automatically included in this book.
View Tribute Book
Services for Mary Glasscock
There are no events scheduled. You can still show your support by planting a tree in memory of Mary Glasscock.
Plant a tree in memory of Mary

Share Your Memory of
Mary
Upload Your Memory View All Memories
Be the first to upload a memory!
Share A Memory
Plant a Tree