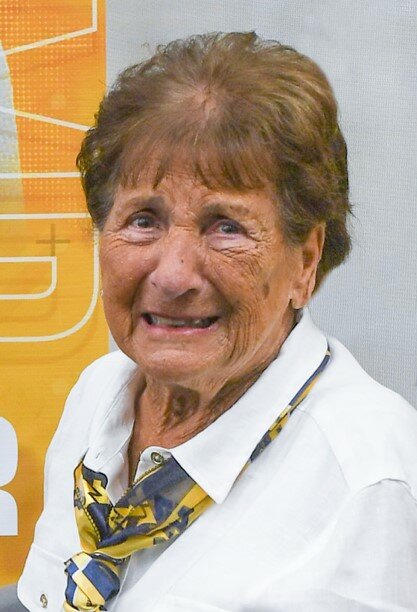 Please share a memory of Eleanor to include in a keepsake book for family and friends.
View Tribute Book
Eleanor Negri Lamb, 100, passed away on May 29, 2022 at Stonerise Healthcare in Morgantown, WV . She was born October 10, 1921 in Morgantown, W.Va., a daughter of the late Bartolo and Edelina Alfieri Negri. Eleanor graduated from West Virginia University in 1943 with a bachelor’s degree in journalism. She worked for WAJR radio in Morgantown and for WPDX in Clarksburg as its director of continuity, personnel director at WVU Placement Service from 1956-1958. On June 9, 1958, Negri Lamb was hired as secretary to athletic director Robert “Red” Brown for West Virginia University’s Department of Intercollegiate Athletics, beginning one of the longest-serving tenures in department history. She was promoted to Brown’s assistant in 1965 and then to assistant athletic director on July 1, 1971. During those years, her primary duties dealt with the department’s finances and arrangements of all athletics events. Eleanor was heavily involved in West Virginia University’s state centennial celebration in 1963; she worked closely with Red Brown on the planning and development of the WVU Coliseum, which opened in 1971, and she also played a vital role in the department’s decision to install the Astroturf playing surface at old Mountaineer Field in 1969. In 1971, a year before Title IX became a federal law, she became the first female to hold a senior administrative role in the WVU Athletic department’s history. She also worked with athletic directors Leland Byrd, Dick Martin, Fred Schaus, Ed Pastilong and Oliver Luck during her amazing 55-year-tenure in collegiate athletics. She retired on March 31, 2013 at the age of 92. In 2018, she was inducted into the WVU Sports Hall of Fame for her contributions to the Athletics Department. Eleanor was a woman whose dash in between the beginning and the end of her time, lead a remarkable life, made many friends and made a lasting impact on the people who worked with her. During Eleanor’s eight years living at Stonerise, she was caring, complimentary and showed kindness to the staff as well as the residents. She was a sun goddess who loved being outdoors. We would like to extend our sincere appreciation for the wonderful care shown from the healthcare providers at Stonerise Healthcare. Special Thank You to B Wing Staff. In addition to her parents, Eleanor was preceded in death by her sister Connie Negri. Survived is her son C.P. Negri, and grandson Kazuki Negri. Friends and family will be received at Hastings Funeral Home, 153 Spruce St., Morgantown, on Thursday, June 2nd from 10 AM until the time of the funeral service at 12:00 noon with Msgr. Anthony Cincinnati, STD, VE officiating. Interment will follow at East Oak Grove Cemetery. In lieu of flowers please donate to your charity of choice. Send condolences online at www.hastingsfuneralhome.com
To send flowers to the family or plant a tree in memory of Eleanor Lamb, please visit Tribute Store
Thursday
2
June

Look inside to read what others have shared
Family and friends are coming together online to create a special keepsake. Every memory left on the online obituary will be automatically included in this book.
View Tribute Book
Share A Memory
Send Flowers
Plant a Tree