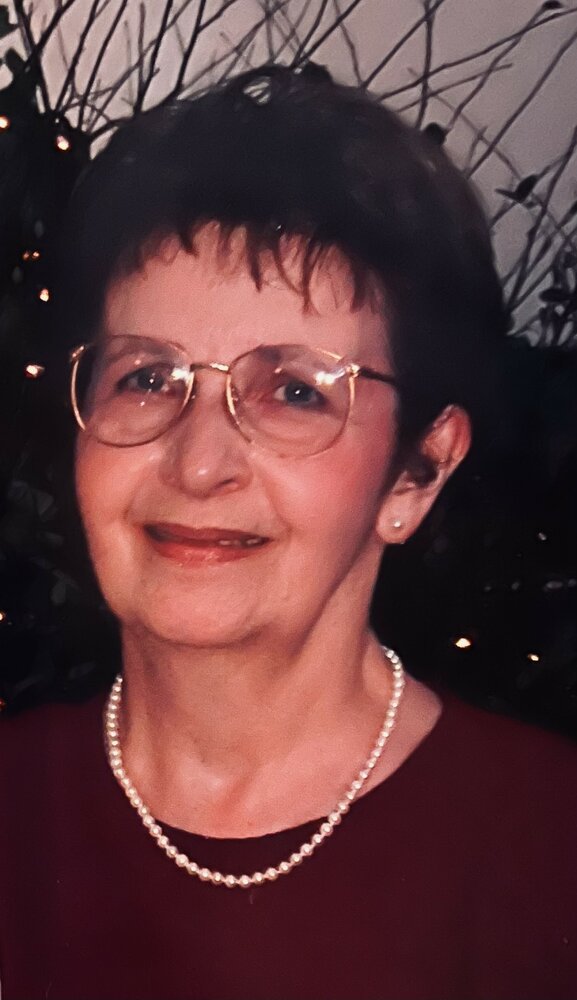 Please share a memory of Freda to include in a keepsake book for family and friends.
View Tribute Book
Freda Marie Conners Taylor of Morgantown peacefully left her earthly body and entered into the presence of her Savior Jesus Christ on Sunday, July 17, 2022. The only daughter of the late Bernard and Virginia (Corbin) Conners, she was born January 11, 1936 in the apartment above her grandmother’s (Ina Burwell Conners) restaurant in Sabraton/Brookhaven during a snowstorm. She graduated from Morgantown High School in 1953 and attended Morgantown Business School where she mastered her typing and short-hand skills. After her marriage to Leonard Taylor on August 6, 1955, she began earning extra money for her family by typing doctoral theses for WVU students before going to work full-time outside the home. She began her secretarial career at WVU Library then went on to work as a secretary at St. Vincent Pallotti hospital, US Selective Service, and finally as an executive secretary at the United States Geological Survey. She was also a certified NRA firearms instructor and assisted her husband Leonard at the Mason-Dixon Rifle Club coaching and training many young people in the safe and proper use of firearms. Her first job was working with her grandmother, mother, and Aunt Gertrude at the family restaurant, Conners Bar-B-Que. Her grandparents had a profound influence in her life and she always stressed the importance of the role grandparents have in their grandchildren’s lives. She credited her salvation to the prayers and testimony of her grandparents, Bernard and Ina Burwell Conners and especially those of John Wesley and Ada Cunningham Corbin. She was passionate about teaching young children about Jesus and especially enjoyed being a preschool Sunday School teacher and working as a mentor with the Mothers of Preschoolers (MOPS) program. “One generation shall commend your works to another, and shall declare your mighty acts.” Psalm 145:4. She is survived by her four daughters: Susan (Steve) Hilderbrand, Marcia (Randy) Clark, Mary Beth (Butch) Renner, and Sharon (Tom) Wass. In addition to her children, she is survived by ten grandchildren: Christina (Tim) Bailey, Zachary Taylor Foy, CJ (Maddie) Renner, Brian Renner, Emily (Lucas) Cubic, Luke (Alyssa) Wass, Claire (Jake) Gohl, Grant Wass, Kate Wass, and Scott Wass; along with step-grandchildren, Jason Clark, Seth Clark and Hilary Clark Williams; and six great-grandchildren: Ethan, Colin, Brycen, Maisie, Ember, and Sawyer. She is also survived by her brother, Robert (Karen) Conners; sister-in-law, Nancy Lee Conners; (former) sister-in-law, Nancy R. Conners; and multiple nieces and nephews. In addition to her parents, she was preceded in death by her husband of 63 years, Leonard, an infant son, and brothers, John Wesley (Jack) Conners and Carl Conners. Friends and family will be received on Thursday, July 21st, at Hastings Funeral Home, 153 Spruce St, from 4 – 7 p.m. A Private family service will be held at a later time, and she will be buried at Beverly Hills Memorial Garden next to her husband. “Charm is deceitful, and beauty is vain, but a woman who fears the Lord is to be praised.” Proverbs 30:31 In lieu of flowers please make donations to The Gideons International Processing Center, P.O. Box 97251, Washington, DC 20090-7251 https://gideons.org/donate or Covenant Christian School, PO Box 342, Morgantown, WV 26507 (Please put CCS on the memo line) https://www.covenantchristianwv.org/ways-to-give Send condolences online at www.hastingsfuneralhome.com
To plant a beautiful memorial tree in memory of Freda Taylor, please visit our Tree Store
Thursday
21
July

Share Your Memory of
Freda
Upload Your Memory View All Memories
Be the first to upload a memory!
Share A Memory
Plant a Tree