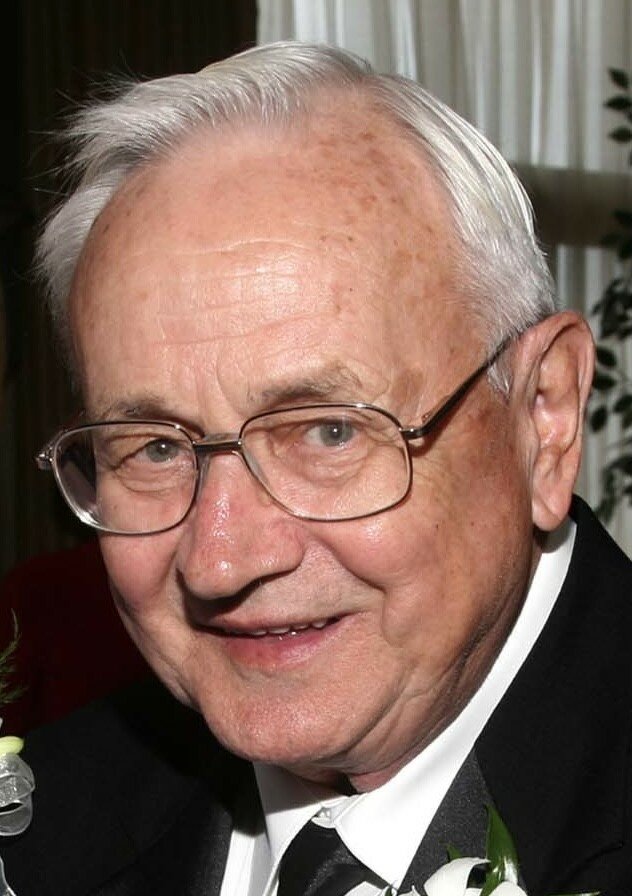 Please share a memory of Robert to include in a keepsake book for family and friends.
View Tribute Book
Robert “Bob” John Kacik passed away on July 23, 2022, at age 92, at Mon Health Medical Center in Morgantown, W.Va. He was born on March 8, 1930, in Smithfield, Pa. He graduated from St. Francis High School in 1949, attended WVU, then served in the U.S. Army and Paratroopers. He was a card shark and rarely lost his favorite game, pinochle. He shared the love of his other favorite game, golf, with his sons. Bowling, water skiing, winemaking and gardening were his other passions. One of his claims to fame was his appearance on The Tonight Show with Johnny Carson. He was a participant in a Tommy Newsom look-alike contest. He is survived by his wife of 61 years, Anna Mae, of Morgantown; sons: Richard of Hendersonville, N.C., Joe (Shannon) of Virginia Beach, Va., and Andrew (Tanya) of Morgantown; daughter, Teresa Bohna (Tony) of Morgantown; sister, Arlene (Charles) Medvick of St. Louis, Mo., and four grandchildren: Sydney Kacik, Kennedy Kacik, Stephen Bohna and Mitchell Bohna. He and Anna Mae met while polka dancing at the Victory Inn near Uniontown, Pa. He retired from Morgantown Machine & Hydraulics after 32 years. He also repaired TVs on the side. A special thank you to Emily, all the nurses, aides and doctors who took care of him at Amedisys. Friends and family will be received at St. Francis de Sales Catholic Church, 1 Guthrie Lane, Morgantown, on Wednesday, July 27th from 6 – 8 p.m. The evening visitation will conclude with a Scriptural Wake Service. Visitation will continue on Thursday, July 28th at the church from 10 a.m. until the Mass of Christian Burial at 11 a.m. with Rev. Msgr. Anthony Cincinnati, STD, VE as celebrant. Interment will follow at East Oak Grove Cemetery. In lieu of flowers, memorial donations for Bob may be made to Catholic Sharing Appeal at St. Francis de Sales Catholic Church, 1 Guthrie Lane, Morgantown, WV 26508. Hastings Funeral Home is entrusted with arrangements and online condolences may be made at www.hastingsfuneralhome.com
To plant a beautiful memorial tree in memory of Robert Kacik, please visit our Tree Store
Wednesday
27
July