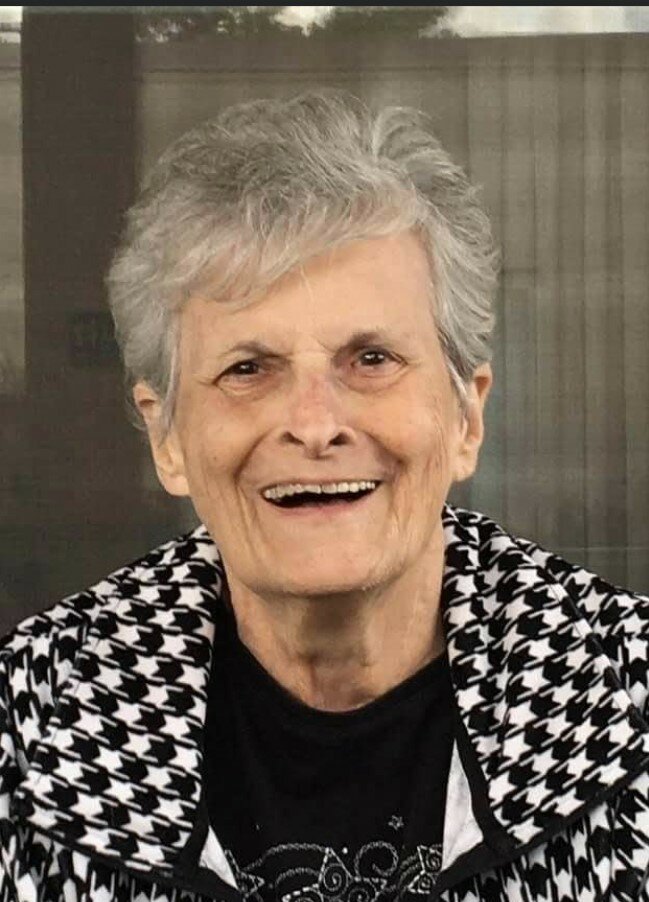 Please share a memory of Karen to include in a keepsake book for family and friends.
View Tribute Book
Karen Constantine Howes passed away on July 25, 2022. She was born August 2, 1936 to the late Tony and Winnie Constantine of Morgantown WV. She was the second of five children. Karen was a 1954 graduate of Morgantown High School, where she graduated with honors as well as a 1957 honors graduate of West Virginia University, where she was a member of the Delta Gamma sorority and the French and education honoraries. In June of 1956 she married Tom Howes and they began their lives together. Karen taught school in their early life while Tom finished medical school. In later years she was a substitute teacher before moving to Florida where she was an employment counselor for the state. Tom and Karen raised their family in Morgantown and were arguably the loudest house on the block. There were screen doors banging, the outdoor “come home” bell ringing, stereos playing, basketballs bouncing, guitars strumming, mini bikes being ridden and children making all manners of joyful and not so joyful noise. It was the place to be on Meridan St. There was often homemade bread, pepperoni rolls and cookies. Many bake sales featured her wares. She always made and elaborately decorated her children’s birthday cakes. In addition to being an excellent cook, Karen was an accomplished seamstress, making Halloween costumes, prom dresses, some of her daughter’s wedding dresses and even men’s suits. She was a homeroom mother, a Cub Scout den mother, an active volunteer with the medical auxiliary, PTA, American Cancer Society, Delta Gamma sorority and the Morgantown swim club. She was the Mom who always showed up with a smile and food to feed the multitudes. She was the wife and mother who always showed up for her husband and each of the children in any way they needed her. Karen was an avid reader and loved to do crossword puzzles, in pen. She continued to do the daily crossword puzzle in the newspaper until dementia began robbing her memory. She will be missed by all who knew her and will live on in the hearts and lives of her children, grandchildren, and great grandchildren. She is survived by her six children: Stephanie and Jim Juristy of Morgantown, Susan Piribek of Winston-Salem,NC, Tom Howes, Jr. and Anne Hoffman of Potomac MD, Ann O’Neal of Morgantown, Tony and Holly Howes of Morgantown, and Andrea and Cliff McHenry of Sarasota, FL. She is survived by grandchildren: Jarod Stalnaker of Morgantown, Ethan Juristy of Morgantown, Courtney and Alston Team,III of Winston-Salem, NC; JT and Tyler Piribek of Cameron, NC; Emily and Todd Schlossman of Littleton, CO,; Travis O’Neal of Morgantown, Blake Howes of Morgantown, Shae Johnson of Clintonville WI, Jordan Howes of Morgantown, Peyton Johnson of Morgantown, Jaden Johnson of Orlando, FL., Parker McHenry of Charlotte NC, and Allison McHenry of Sarasota, FL. She is survived by nine great grandchildren: Alston, Emma and Ruthie Team of Winston Salem, NC, Bear Lee, Addington and Georgie Piribek of Cameron, NC, Addie Jane and Theodore Schlossman of Littleton, CO, and Wrenley O’Neal of Morgantown. She is also survived by two siblings, Steven and Marsha Constantine of Dallas TX, and Leah and Bob Jones of West Palm Beach FL. She was preceded in death by her husband, Tom Howes; parents, Tony and Winnie Constantine; grandson, Payton McHenry; brother, Marc Constantine; and sister, Jane Smith. Friends and family will be received on Friday July 29th, from 5- 7 p.m. at Hastings Funeral Home, 153 Spruce St., Morgantown. Visitation will continue Saturday July 30th from 10 a.m. until the time of the Funeral Service at 11 a.m. with Pastor Martha Ognibene officiating. Burial will follow at Beverly Hills Memorial Gardens. The family would like to thank the caregivers and staff at Stonerise for their kind and compassionate care in her final years. In lieu of flowers, donations are encouraged to be made in Karen’s memory to The Pantry Plus More, 9 Rousch Drive, Morgantown, WV 26501. Send condolences online at www.hastingsfuneralhome.com
To plant a beautiful memorial tree in memory of Karen Howes, please visit our Tree Store
Friday
29
July

Share Your Memory of
Karen
Upload Your Memory View All Memories
Be the first to upload a memory!
Share A Memory
Plant a Tree