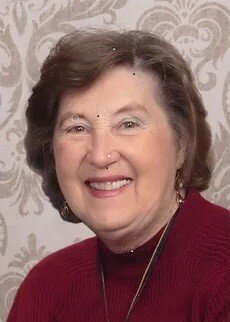 Please share a memory of Helen to include in a keepsake book for family and friends.
View Tribute Book
Helen Marie Dettori (née Dalton) of Palm City, FL had many roles in her life – daughter, sister, wife, mother, grandmother, co-worker, friend - but she was elegant in all she did. She maintained that grace until she passed quietly on December 13, 2021, at the age of 85. Helen was the only daughter of Gay William Dalton and Edith Mae Dalton (née Nicholson), born on September 5, 1936, in Morgantown, WV. Her early studies were in a one-room schoolhouse, where she excelled and completed both the fifth and sixth grade in one school year. She went on to graduate at age 16 from Morgantown High School, the Class of 1953. She worked in Morgantown where she met the love of her life, Emanuel Dettori, who was a student at West Virginia University. He asked a mutual friend about Helen, but the friend said she would not talk to him without a "proper introduction." Introductions were made, a courtship ensued, and Manny and Helen were married April 27, 1957. They have fond memories of a beautiful, sunny, wedding day with the homestead apple tree in glorious full blossom. By the end of 1967 they had 3 children and Helen ran the household with the same organization and expertise that she was known for in her professional life. In 1971 Helen re-entered the workforce as the secretary to the President of United Aircraft of West Virginia. In 1979, the family moved when Helen was transferred to Pratt & Whitney's East Hartford, CT, national headquarters to be the executive secretary for several company vice presidents. She retired from Pratt & Whitney in 1999, and she and Manny moved to Palm City, FL. In retirement she enjoyed playing competitive bridge, investing in and following the stock market, shopping, and watching sports, especially WVU football and basketball and the Pittsburgh Steelers. She was known for her good humor, her sound advice, her incredible skill at finding bargains, and her endless love and support of her family. In addition to Manny, Helen is survived by her children, Jeff Dettori of Sabattus, ME; Kim Dettori (Steve Baird) of Stuart, FL.; and Mark Dettori (Lorie Wyant) of Bridgeport, WV; her grandchildren, Matthew Dettori of Lewiston, ME; Sean Dettori and Shannon Dettori of Bridgeport, WV; two brothers, Harry Dalton (Joyce) of Morgantown and Dennis Dalton of Fort Myers, FL and several nieces, nephews, and cousins. Helen was cremated at her request. A graveside memorial service will be held at Nicholson Cemetery Morgantown, WV with Pastor Dan Meadows officiating on Friday, October 28, 2022 at 3:30 pm. In lieu of flowers, the family requests donations in her memory to St. Jude's Children's Hospital or a charity of your choice.
To plant a beautiful memorial tree in memory of Helen Dettori, please visit our Tree Store
Friday
28
October

Share Your Memory of
Helen
Upload Your Memory View All Memories
Be the first to upload a memory!
Share A Memory
Plant a Tree