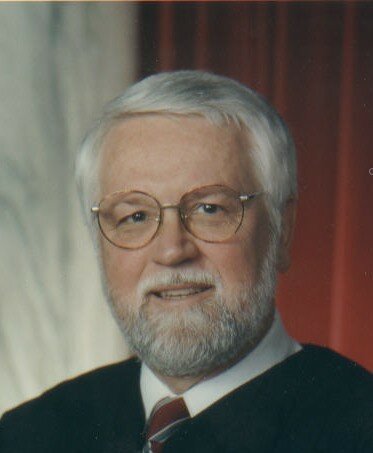 Please share a memory of Larry to include in a keepsake book for family and friends.
View Tribute Book
Larry V. Starcher, a retired Supreme Court Justice and Monongalia County Circuit Judge, passed away Saturday, December 24. He was born September 25, 1942 in Henry’s Fork, WV, a son of the late Cleo Earline and Susie Violet (Roach) Starcher. He was 80. Justice Starcher was born at home in Calhoun County, West Virginia, on September 25, 1942, one of seven children. He was raised in Spencer, in Roane County, and graduated from Spencer High School in 1960. He earned his bachelor’s degree (1964) and his law degree (1967) from West Virginia University. Prior to being elected circuit judge in 1976, he served as an Assistant to the Vice-President for Off-Campus Education at West Virginia University, as Director of the North Central West Virginia Legal Aid Society, and as a private lawyer. He served as circuit judge for 20 years, 18 as chief judge. While sitting as a circuit judge, Justice Starcher served as a special judge in 23 of West Virginia’s 55 counties. He presided over the trial of 20,000 asbestos injury cases and a six-month state buildings asbestos trial. As a trial judge, he was active in the area of juvenile justice, including establishing alternative learning centers for youths at risk and a youth shelter. He also pioneered the use of work release and community service as punishment for nonviolent offenders. In November 1996, he was elected to a full twelve-year term on the Supreme Court of Appeals. He served as chief justice in 1999 and 2003, and he promoted action in several areas of judicial administration, specifically the Court Facilities Committee, Public Trust and Confidence in the Judiciary, Mental Hygiene Commission, Court Technology Summit, Self-Represented Litigants Task Force, State Law Library improvements, and he reactivated the Gender Fairness Task Force. In 2004, in partnership with the Mountain State Bar, West Virginia’s historic minority bar association, Justice Starcher and his senior law clerk, Thomas Rodd, initiated the J.R. Clifford Project, a series of statewide community programs and publications based on the life and work of J.R. Clifford (1848-1933), West Virginia’s first African American lawyer. He retired from the Supreme Court at the end of 2008 but continued working as a senior status judge by appointment. He also served as an adjunct lecturer at the West Virginia University College of Law until 2020, teaching pre-trial litigation and trial advocacy, and he advised the Lugar Trial Association. He is survived by his wife, the former Rebecca Wiles; three children, Mollianne Starcher Hamilton and her husband Mark, Larry Victor Starcher, II and his wife Jennifer, and Amy Starcher Muchnok and her husband Tim; Grandchildren - Avary Hamilton, Owen Hamilton, Lily Hamilton, Hayden Starcher, Alexandra (Lexi) Starcher, Luka Muchnok, Mila Muchnok; siblings, Reta Carol Wycoff, Andrew J Starcher and his wife Lois Ann, Lois S Cashdollar, Norma S Harper and her husband Richard, and Warren E. Starcher; and sister-in-law, Anita Starcher. In addition to his parents, he is preceded in death by his brother, Ronald R Starcher and brother-in-law, Richard Wycoff. Details of a public memorial service in the Spring of 2023 will be announced at a later time. In lieu of flowers, memorial donations may be made to the Justice Larry V. Starcher Adjunct Faculty Endowment, 3V 983, c/o WVU Foundation, One Waterfront Place, 7th Floor PO Box 1650, Morgantown, WV 26507-1650. Hastings Funeral Home has been entrusted with cremation arrangements and online condolences may be made at www.hastingsfuneralhome.com.
To plant a beautiful memorial tree in memory of Larry Starcher, please visit our Tree Store

Look inside to read what others have shared
Family and friends are coming together online to create a special keepsake. Every memory left on the online obituary will be automatically included in this book.
View Tribute Book
Services for Larry Starcher
There are no events scheduled. You can still show your support by planting a tree in memory of Larry Starcher.
Plant a tree in memory of Larry

Share Your Memory of
Larry
Upload Your Memory View All Memories
Be the first to upload a memory!
Share A Memory
Plant a Tree